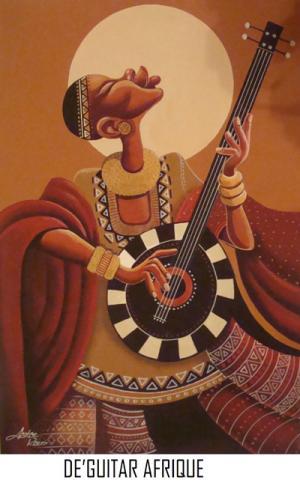 This article was first published in 1999 in Philadelphia City Paper

When someone suggested that I go and see the black art show at the Apollo of Temple, I didn’t know what to expect. I was new in Philly, and I thought that this might be the local version of the famed Apollo theatre in Harlem where our best and worst got a chance to perform. I called my sister’s boyfriend for directions. “Is it far from me?” “No, it’s located in the ghetto surrounding Temple University, but the school doesn’t broadcast that.” Ah! Race is such a factor in this city–really there is no escape.

It’s billed as the “14th Annual October Gallery Philadelphia Art Expo in Celebration of an American Phenomenon—Whew! The title didn’t suggest an awareness of minimal art, and it put a dent in my allotted 650 words. Anyway, what’s so phenomenal about African-American art? We’ve had African-American artists as far back as Pittsburgh, Pa. born Henry O. Tanner—hatched in 1859. Tanner’s work even begs the question: What is black art? His work is indistinguishable from that of his white contemporaries–pre-modern portraitists and landscape artists.

Cooking up labels is as American as Andy Warhol’s Campbell’s soup cans.  We have feminist art, hispanic art, and even elephant dung art, which  is being shown at the Brooklyn Museum of Art in New York City, and has made Mayor Rudy rude. It is all Chinese to me. Certainly each artist brings his or her temperament to a work of art, but at the end of the game, art is the winner.

A week before the show, I listened to Mercer Redcross, owner of the October Gallery, and promoter of the exhibition. He was guest on a local black radio station. “The mainstream media has never given much space to the event,” he said.  I couldn’t confirm that, but I certainly was going to go and support my brothers and sisters. Two of the participants were on the show with Mr. Redcross. One painted children’s pictures, and the other artist, a former technocrat, said that he liked to paint boxers who never fought each other—Muhammad Ali bumping off Joe Louis. Well, LeRoy Neiman, the society painter, has made millions painting boxers and other celebs, so why not this guy?

Friday art night arrived and I emerged from the Cecil B. Moore station, and got my first look at Temple University—a row of rather uninspired buildings. I entered the Apollo of Temple (weird name) and was greeted by two beauties. Philly must have the greatest concentration of beautiful black women on the East Coast. There was a fairly good crowd of African Americans walking about, looking and talking to the artists who had their wares on display. The work was a 50-50 split between art and crafts. All of it, with the exception of a few, emphasized African-America themes: family, roots, children and society—nothing wrong with that, but most of it was commercial flimflam from the velvet school of art.

Now (using the words of our low-esteemed Supreme Court Justice Clarence Thomas) “high-tech lynch” me if you will, but there was a lot of bad art at the Apollo, and if this show was likened to the famed Apollo shows in Harlem, a lot of tomatoes would have been tossed at the participants.

Where were our leading African-American artists? I mean critically acclaimed artists, such as Martin Puryear, Richard Hunt, Sam Gilliam, Betye Saar, and Lorna Simpson? Mr. Redcross would have served the white and black community much better by having a crafts show and a separate professional exhibition at his October Gallery. Well, arty-tarty, I left and went over to Baltimore Avenue, ordered a pizza and a well-deserved beer. The waitress asked a long-haired customer what he was painting these days. “Oh, just a still life with a coca-cola bottle,” a perfect description of my night at the Apollo.