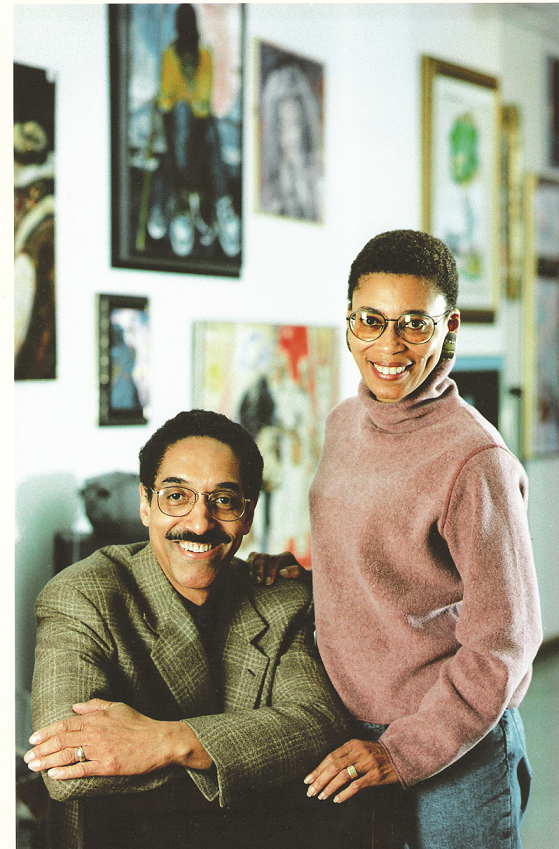 They met in college. He was class president. She was active in student council and her sorority. The attraction was mutual.

“Evelyn had skills,” recalled Mercer Redcross of his future wife and business partner during their days at Fisk University in Nashville in the late 1960s. “She would come to the dorm, in the lobby, and type up invitations for campus events.”

Mercer was an economics major from 57th and Girard in West Philadelphia. Evelyn was a psychology major from Orangeburg, S.C.

The big-city boy and the small-town girl met one spring day, married nine months later and moved to Philadelphia.

Years later, after becoming avid art collectors, Mercer and Evelyn Redcross opened October Gallery in West Philadelphia and created one of the largest black art expos in the country.

The 15th annual Philadelphia Art Expo opens today at the Liacouras Center, with more than 200 artists and vendors playing host to 40,000 people.

“They have done more for the local artists than any other gallery in Philadelphia,” said Cal Massey, an artist from Moorestown, N.J., whose signature piece is “Angel Heart,” a black angel with upswept hair. “They’re the ones that bring the people to us. Otherwise, they wouldn’t know about us.”

The Redcrosses didn’t plan to go into the art business. After their move to Philadelphia, Mercer got his bachelor’s degree at Cheyney University and MBA at Eastern College. Evelyn finished at Temple and also earned a master’s degree in journalism there.

He became a bank officer, and she became a welfare caseworker.

“We were art collectors first,” favoring mostly European artists, such as Salvador Dali and Giovanni Battista Moroni, Evelyn said. “But we were excited about the work of African-American artists. The only setback was we had to go everywhere to find it.”

So they decided to open a gallery, figuring it was the best way to get the work of black artists under one roof. They opened October Gallery at 38th Street and Lancaster Avenue in 1985.

The timing seemed right. Prints and paintings by black artists were appearing each week on the walls of the Huxtable household in the popular sitcom “The Cosby Show.”

“We weren’t thinking about Bill Cosby when we started,” Evelyn said. “We thought we couldn’t be the only people who saw value in this product.”

They weren’t. Still, many blacks weren’t used to seeing images of themselves in traditional art, so they were slow to commit to purchasing anything. And the Redcrosses learned that just enjoying art isn’t enough if you have a gallery.

“You have to approach it as a business and art happens to be the byproduct,” Mercer said.

In business terms, you might say that Mercer, 52, is the marketing guru, while Evelyn, 51, who has worked for the Barnes Foundation and taken art courses, is the product manager.

The Redcrosses, who have three adult children, make a good team, customers say.

“I’m looking at three Beardens, a Byrd. . .the Austino, eight, the Turner, nine. . .” Finally, she rounded off the count at 20 pieces. “We have a gallery within our offices.” October Gallery was in West Philadelphia for nine years before moving to Church Street in Old City and finally to 68 N. 2nd St., along a row of art galleries.

From the beginning, road shows were important to increasing the gallery’s name recognition nationally. Annual 35-city tours became the norm. Marketing was crucial.

“We needed to stimulate art, not just in Philadelphia,” Evelyn said. “We had to set sparks off all over.”

With its slogan – “Connecting people to art” – the gallery works with newcomers as well as more high-end buyers. It also provides a place for up-and-coming artists to display their works.

The old Dunfey Hotel on City Avenue was the site of the first expo, which was attended by 900 people. As its popularity grew, the expo had to move to accommodate the crowds – The University Sheraton, the Wyndham Franklin Plaza. Adams Mark hotel, the Pennsylvania Convention Center, the Philadelphia Marriott. Since 1998, it’s been housed at Temple’s Liacouras Center.

The expo’s success is due in part to saturation advertising. Mercer has run ads in magazines such as Essence, Black Enterprise, Art Trend, Ebony and Upscale, as well as local and national newspapers.

It includes workshops and draws poets and prominent African-American artists such has Charles Bibbs and Annie Lee.

It’s an educational experience as well. Groups of schoolchildren will be brought in tomorrow to learn about art from the artists. During the showcase, customers can talk to the artists.

Of the expo, Gore said, “I don’t feel in any way that will impact me. I have a clientele who are collectors specifically of fine art. They’re not in prints in any way.”

Gore said the expo is good because it has “evoked an awareness of people of color to their culture.”

But he said he thought it should be “a little more extensive.”

The Redcrosses see their mission as educating. They offer prints for $20 with other pieces ranging up to several thousand dollars. The average is $400 to $500.

“The African-American culture speaks to how people live,” Evelyn said. They try to create an atmosphere “where people come to experience the culture to take from it, to dip in it and take what they need.

“We’ve introduced a lot of people to art. And many are now aficionados.”