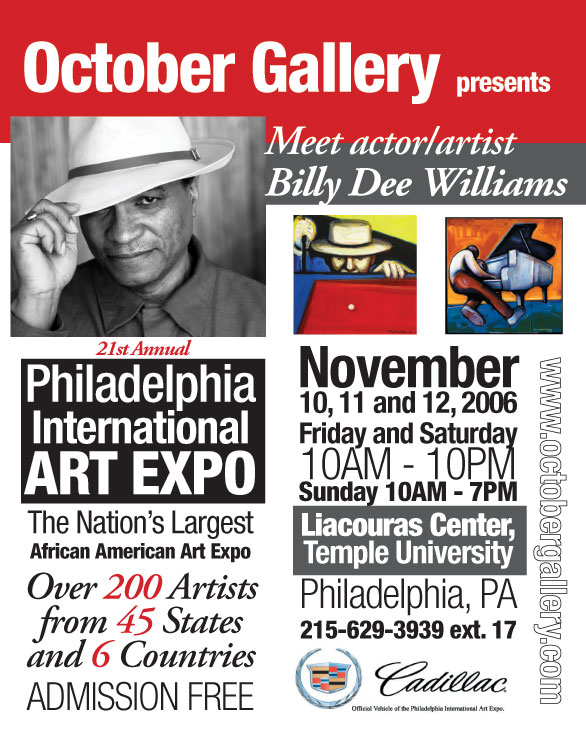 With all the camera phones, video recorders, and people lining up for autographs, it was easy to tell there was a celebrity in the room.

Yesterday, Billy Dee Williams, known for roles in Lady Sings the Blues and Brian’s Song, was busy signing autographs and posing for photos.

But the man known to many as Lando Calrissian in The Empire Strikes Back and Return of the Jedi wasn’t promoting a new television series or out on the road filming a movie.

Williams was in town as the featured artist for the 21st Annual October Gallery Philadelphia International Art Expo, held at the Liacouras Center at Temple University. This year’s theme is “Connecting People With Art.”

By the time the show ends today, 40,000 people will have visited the Liacouras Center to see about 140 artists from the United States, Africa, Canada and the Caribbean. About 50 percent of the artists this year exhibited for the first time.

Williams, who has donated his artwork to the National Portrait Gallery in Washington and the Schomburg Center in New York, said he had been painting and drawing all his life.

“My whole life has revolved around creativity,” said Williams, who considers himself a “lucky person” to be able to do what he loves. “It is a wonderful, satisfying way to live one’s life.”

The event is the largest African American art expo in the country, according to Stephanie Daniel, spokeswoman for October Gallery.

“This is one of the few places where you can see so many black artists and their work,” said James Stewart, who, along with his wife, Caryl Sheffield, came from Pittsburgh for the exhibit. The two liked to interact with the artists and get to know them.

Frazier, 63, of Dallas, grew up in New York but ran away to Philadelphia as a teenager.

“They found me lying in the gutter in front of The Inquirer, hustling and trying to survive,” Frazier said, recalling how his family came and got him.

Later, Frazier, who started painting at age 15, joined the Army and sent sketches on the back of matchbooks and C ration wrapping back from Vietnam to his family.

Now a noted artist who is working on a series of paintings on the civil rights movement, Frazier sees the art expo as a place for new and established artists to meet.

“We get a chance to socialize together and pass the torch on,” he said. Frazier has been coming to the exhibit for 18 years and noted that some of the artists exhibiting this weekend, such as Robert Carter and Paul Goodnight, are “living legends” in their field.

Carter, an artist and professor at Nassau Community College on Long Island, said the exposure to African American artists and the practical aspect of selling art are a “pragmatic” part of the art expo.

“If no one is in the audience, you can’t produce a play,” said Carter, who was wrapping up two prints of some of his work for a buyer.

About 140 artists will be exhibiting fine arts, crafts, books and jewelry.