The divine art of the Kingdom of Ife 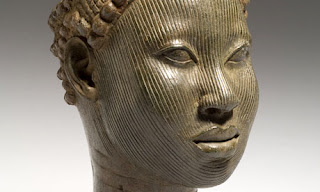 Harmonious and humane, the sculptures of this lost African city have a greatness that any civilisation would recognise.
In his television series Civilisation, the great Kenneth Clark speaks of Raphael. Standing in the Raphael rooms in the Vatican, he admits that on first sight they can seem insipid, and quotes Sir Joshua Reynolds, who acknowleged the same problem. Reynolds warned his students that when they finally reached Rome they might find Raphael’s frescos disappointing, but urged them to persevere until they did find them beautiful and moving. It’s a lovely moment – you half expect Clark to say he finds Raphael a complete bore. But he doesn’t. “Well,” he says with a beatific smile, “I’ve spent a lifetime doing just that. And can I tell you it is worth it.”
Recently, in responding to other comments posted here, I wrote that art is soft stuff, demanding a subjective response. That is true, in part, but it is not the whole truth. The more correct statement would be: most art that we encounter demands a subjective response from us, which is very much a product of our reaction; but there is a type of art whose greatness pre-exists and survives us, and whose authority makes our like or dislike of it seem irrelevant.

This kind of art is classic art – classic because it seems to exemplify such clear values, to address such fundamental cognitive faculties, that its merit is absolute, and a failure to be moved by it is, essentially, our own failure.