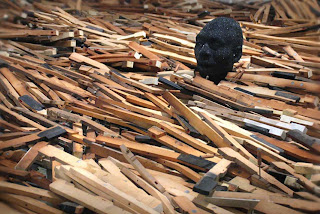 ATLANTA, GA.- The High Museum of Art will organize and premiere the most comprehensive presentation of works by Atlanta-based artist Radcliffe Bailey beginning June 28, 2011. The exhibition “Radcliffe Bailey: Memory as Medicine” will highlight the artist’s experimentation with diverse media, showcasing sculptures, paintings, installations, works-on-paper, glass works and modified found objects. Comprising more than 25 works, “Memory as Medicine” will include new art created for the exhibition as well as works never before seen on public display. The exhibition will also juxtapose Bailey’s work with a display of classic African sculptures from the High’s permanent collection and selected loans of African art to show the influence of African aesthetic practices on the artist’s work.

“Radcliffe Bailey: Memory as Medicine,” organized by the High, will be on view in Atlanta from June 28 through September 11, 2011. The exhibition is scheduled to travel to the National Museum of African Art, Washington, D.C. (presented in partnership with the National Museum of african american History and Culture); the McNay Art Museum, San Antonio; the Museum for African Art, New York; and additional venues yet to be announced.

“In this exhibition, visitors will discover Radcliffe’s ability to a combine sculpture and painting, two- and three-dimensional forms and grand and intimate scales, creating works of art that are rich in texture, detail, color and, most importantly, meaning,” stated Michael E. Shapiro, the High’s Nancy and Holcombe T. Green, Jr. Director. “The High is pleased to debut this exhibition in Atlanta, underscoring the Museum’s continued commitment to celebrating the talents and legacies of our local artists.”

The exhibition will present Bailey’s work divided into three main themes: “Water,” “Blues” and “Blood.” Works included in the “Water” group will feature the artist’s references to the Black Atlantic as a site of historical trauma as well as an artistic and spiritual journey. “Blues” will highlight works that illustrate the importance of music as a transcendent artform, including Bailey’s 1999 painting “Transbluesency,” which references a book of poems by Amiri Baraka and echoes the “Blues” theme. The third theme, “Blood,” will feature works focusing on the ideas of ancestry, race, memory, struggle and sacrifice. This section will further explore the artist’s engagement with African sculptures in tandem with his investigation of his own family’s DNA.

In 2006 Bailey learned his family’s ancestral links to the Mende people of Sierra Leone. This inspired the smallest, most intimate work he ever created―a miniature drawing done in ink and coffee on a piece of sheet music that features a Mende mask framed within a tiny red-velvet lined, 19th-century tintype case, as though a family portrait. This work will be on view in the exhibition alongside more recent works, including a new sculpture that has the smooth, curvilinear forms of Mende masks. It is made of wood and was repeatedly rubbed with finishing wax in a daily studio ritual. Minus the functional purpose of Mende masks, this work becomes a Brancusi-esque objet d’art, an inscrutable prop for a Neo-Dada-style, contemporary art world performance. Another 2010 work, “Clean-up,” is a painted wooden sculpture in the form of a 10-foot-high baseball bat. Bailey comments, “The reason why I made the bat so big was to beat down all the things that I confront. Baseball being one of my first passions, before art, the bat was like my paintbrush. In baseball, the fourth batter that comes up is the clean-up hitter.”

At the core of the exhibition will be seven sets of “medicine cabinet sculptures.” Their contents include a broad range of culturally charged objects, imagery and raw materials, from indigo powder to tobacco leaves to Georgia red earth. Just as Kongo minkisi sculptures from central Africa contain healing and protective medicine within mirrored packets, the socially cathartic contents of Bailey’s medicine cabinet sculptures are deeply recessed under reflective, tinted glass. These sculptures were conceived to link the too often disconnected histories of peoples of Africa and the African Diaspora and to emphasize collective experiences.

“Radcliffe Bailey’s art is consistently informed by a strong social and historical consciousness, and solidly grounded in family and community. The exhibition combines a rich, narrative content with a high-level of abstraction and poetic resonance to explore questions of history and memory,” said Carol Thompson, the High’s Fred and Rita Richman Curator of African Art and curator of the exhibition. “Bailey’s art traces the complex network of his ‘aesthetic DNA’ to create an antidote to cultural and historical amnesia.”

A number of works in the exhibition will highlight the artist’s penchant to animate his work with large-scale photographic reproductions of black-and-white prints given to him by his grandmother as well as historic photos he collects, in order to place african americans at the center of both American and world history. “I am interested in an Africanism that permeates our contemporary world but goes unnamed and is not talked about or fully addressed culturally,” stated Bailey. “I am interested in the impulse of that mysterious African force that propels black people wherever they are in the world.” Bailey strives to convey an African sensibility and spirituality that he says “exists in the tangible and the intangible.”

Opening and closing the exhibition will be several works that reference Èsù, the guardian of the crossroads and mediator of opposites who is honored throughout Yoruba regions of Africa and the African Diaspora. These early 21st-century works by Bailey resonate with the late 19th- or early 20th-century dance staff for Èsù from the Fred and Rita Richman Collection, also included in the exhibition. Caged African Finches will add a sound element to the exhibition.

Radcliffe Bailey
Radcliffe Bailey was born in 1968, in Bridgeton, New Jersey. He grew up in Atlanta, earning a bachelor’s degree in fine art from the Atlanta College of Art in 1991. From 2001 to 2006 Bailey taught at the Lamar Dodd School of Art at the University of Georgia. He received a Joan Mitchell Foundation Grant (2004) and was a visiting faculty member at Skowhegan School of Painting and Sculpture (2006). In 2008, he created large-scale glass works as a participant in the Toledo Museum of Art’s Guest Artist Pavilion Project (GAPP). His work is represented in leading museum collections including the Metropolitan Museum of Art, New York; the Smithsonian Museum of American Art and the Corcoran Gallery of Art, Washington, D.C.; San Francisco Museum of Art; the Museum of Fine Arts, Houston; the Nelson-Atkins Museum of Art, Kansas City; the Art Institute of Chicago; and the High Museum of Art, Atlanta. In 1994 Bailey’s work was included in “The Hale Woodruff Memorial Exhibition” at The Studio Museum of Harlem. In 1996 Bailey gained acclaim for his large-scale mural “Saints,” a commission for Atlanta’s Hartsfield-Jackson International Airport for the 1996 Summer Olympics in Atlanta. “Saints” remains on view, welcoming travelers entering the airport at International Terminal E.