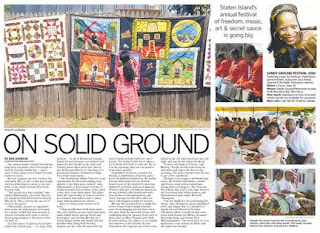 The annual Sandy Ground Festival has long been a popular event for people in search of music, family fun — and a taste of that spicy, secret Sandy Ground barbecue sauce.

But last summer, the free outdoor festival went BIG. In fact, it was practically overrun with visitors, much to the surprise of the Sandy Ground Historical Society staff.

“The people just kept coming,” says Sylvia D’Alessandro, executive director for Sandy Ground Historical Society in Woodrow. “By 4 o’clock, we ran out of food! It was great.”

D’Alessandro assures us organizers have made the adjustments necessary for a larger crowd this time around, so visitors certainly don’t have to worry about going hungry at this year’s event from 1-6 p.m. June 26.

The first piece of land on record purchased by a black man — i.e. Capt. John Jackson — in all of Richmond County, Sandy Ground became a settlement and haven for free blacks in the early 19th century, when there were few even in the abolitionist North. To this day, it’s a historical reminder of America’s fight for a truly equal union.

“The festival has always been for us an opportunity for the surrounding community to see what goes on here” says D’Alessandro, a descendant of some of Sandy Ground’s first settlers. “Once they come, they come back again. This gives them the opportunity to come in and be in a relaxed atmosphere, and to enjoy some African-American culture.”

And, of course, some serious soul food.

“They usually have fresh ham, spare ribs, and chicken, potato salad, macaroni salad, baked beans, greens, bread and beverages,” says Jerome Moody, 65, a Staten Island native and Sandy Ground member who along with brother, Eugene, are the only two men with the secret Sandy Ground barbecue sauce recipe. “It’s really festive but it takes a lot of work. You have to start the fire at 6 in the morning, and you can smell it from miles around.”

Somewhere between a reunion for friends, a celebration of history, and a good old fashioned barbecue, the Sandy Ground Historical Society Festival boasts tours of the property’s museum, children’s activities and entertainment. Vendors will also sell African-American art and jewelry, offer health and wellness products and information, and Tracy Thompson will offer cakes for those still hungry enough for dessert.

Moody, who learned how to make the secret tomato-based Sandy Ground sauce from hanging around three separate men with the ancestral recipe, and combining what he gleaned from each of them, lives in West Virginia now. Still, he never misses the chance to see family and relatives at the festival. He also remembers the long history of the event, which in the old days lasted late into the night and ran for the whole weekend.

“It was something to behold,” says Moody. “People would come from far and wide, and dance till three in the morning. The police would come by, just to get a free sandwich.”

Though it’s no longer a weekend-long event, the festival still draws a crowd and boasts some serious musicians. Along with returning act The Pantonic Steel Band, this year’s tent stage features the Sojourner Jazz String Quartet, and Harlem-based jazz singer Rochelle Thompson.

“I’m just thrilled to be performing for them,” says Thompson, an accomplished artist and singer, who is a member of Sandy Ground Historical Society. Thompson plans to perform jazz standards with pianist Jon Weiss, drummer Butch Bateman, and bassist Fred Weidenhammer. “The work they do is so important to the American Fabric and the American lineage.”