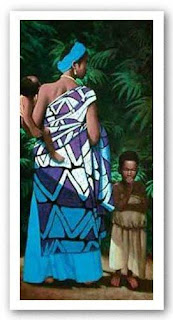 About the Artist:
MOORESTOWN-Cal Massey said that the wonderful images that appear on his canvases come to him during his daily meditations. He jots them on notecards and stores them in a filing cabinet that stands near the easel in his studio. “Everything in my work is spiritual,” the 80-year-old artist said. Entering the artist’s home/gallery studio on Dawson Street is almost a spiritual experience in itself. Messiah, a rendition of a black Christ as one with the earth, standing between the galaxies and the oceans, is the first painting a visitor notices. Near it hangs “Angel Heart”, which Massey considers one of his most popular works, inspired in part by the lack of black angels in traditional artwork. The angel’s hair, styled in a full Afro, is a tribute to the natural beauty of the black woman, Massey said. For years, Massey’s work has represented the black community in the art world. Now the artist, whose work already hangs on the walls of Congress members and rock stars, will see his work hang from the necks of Olympians. Massey was one of 13 artists from around the world chosen to design a commemorative medal for the 1996 ,Summer Olympics in Atlanta. His design, The High Jump, depicts a young black woman – her back arched slightly, her knees bent – as her thighs begin to top the bar. He said his is the only medal that features an athlete of color. “I’m proud to be a role model,” Massey said. The High Jump will be cast in sterling silver and run two inches in diameter. The medals will go on sale in late March or early April, and remain available until after the Games end. The Olympic Committee expects to raise more than $20 million through the sale of the commemorative medals. Massey, a former Franklin Mint designer and sculptor, designed the mint’s first commemorative medal -a Mac arthur Memorial Medal- and went on to design more than 200 medallic designs for the mint. He began drawing at age 4, when he traced newspaper comic strips by holding them up to a window. Growing up with his mother and four siblings in Morton, Delaware County, the young artist used pen and paper to communicate with the world around him. One of his brothers communicated with sound. Once, Massey joined his musician brother at a jazz band rehearsal in the city, and found himself sketching John Coltrane and other greats of that era. After graduating from the Hussian School of Art in Philadelphia in 1950, Massey went into the comic book industry. There, he drew everything from science fiction tales to so many war stories “that I got battle-fatigued.” But without that experience the artist said, he doesn’t think he’d be where he is today. “As a comic book illustrator, I drew blood and guts all the time, but you got to do what you got to do,” Massey said. “Comic strips are behind all these works here today.” It’s hard to see that as one examines the paintings hanging in the artist’s home and gallery. The colors Massey uses are soft ones- pinks, greens, and yellows – that gently blend into each other, not the bold red and blues of the strips. The subject matter is different, too. A supernatural of a different kind is being appreciated in Massey’s work now. His “Genesis” series featuring orbs of orange fire and blue ice, are strong, spiritual works. The faces staring out from Massey’s canvases aren’t all unfamiliar. He used his grandson’s face as a model when he illustrated “My First Kwanzaa Book” a few years ago. A neighborhood girl modeled for the painting “African Woman in Bondage”, and it is his wife’s figure striking a proud pose in “Ashanti Woman”. The Olympic committee invited Massey to submit work to its competition after seeing a sculpture he did for the Statue of Liberty’s renovation project in the mid-1980’s.Massey’s bas-relief plaque showed two women arriving on Ellis Island from the French West Indies. As now, Massey’s work in the show was the only one depicting individuals of color. Although friends tell him it’s time to retire, Massey believes that age is a matter of arteries.” Besides, he can’t stop now: “I still have 200 more paintings to do” he said, gesturing to his filing cabinet.