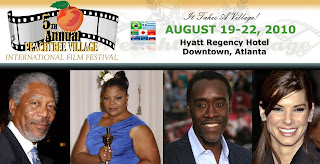 PVIFF is hosted by The African American Cinema Gallery (AACG) & Gipp. Museums, Inc. PVIFF attracts 5,000+ people each year from around the world. PVIFF was created in 2006 under the previous name (Sweet Auburn International Film Festival) and have served as the launching pad for many successful filmmakers and other artists alike in the film & entertainment industry. This dynamic international film festival showcases feature length films, shorts, music videos, documentaries, and screenplays from around the globe. PVIFF also feature celebrity attractions, innovative workshops, panels, parties, and much more. PVIFF is poised to become one of the most celebrated film events through dynamic programming and a dedication to helping filmmakers excel in their careers. PVIFF’s brand is entrenched in the old saying “It Takes A Village.”

Our vision allows us to create a village atmosphere that provide opportunities not only for filmmakers but for business owners and film enthusiasts. Artists such as Director/Writer Rob Hardy of Rain Forest Films, Producer, Roger Bobb of Tyler Perry Studios, Director, Leslie Small, Casting Director, Alpha Tyler of Tyler Perry Studios, Best Selling Author Omar Tyree, Actor, Bill Nunn, Director, Kenny Leon, Humanitarian, Afeni Shakur and more have all participated in various aspects of PVIFF over the years. In 2006 during PVIFF’s first year the winning short film “Binta & The Great Idea” was nominated for an Academy Award and numerous other projects have received phenomenal acclaim throughout the years as well. With increased exposure, the assistance from the film and business community PVIFF will continue to help ignite opportunities and make dreams to come true for decades to come.