Beyond the Harlem Renaissance 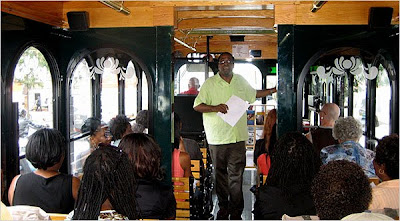 FEW aesthetic labels are as linked to a neighborhood as the Harlem Renaissance, the cultural movement of the 1920s and ’30s that created some of the most significant American art of the 20th century.

So when the gallery owner Averlyn Archer and the tourism professional Jacqueline Orange teamed up to create a trolley-bus tour of new art in Harlem called ArtCrawl, that invokes the Harlem Renaissance on its Web site (artcrawlharlem.com), the act had a touch of hubris.

Until they explained their inspiration in a recent interview.

“Art galleries in Harlem are suffering a little bit,” said Ms. Orange, who runs Taste Harlem tours. “And so we started to work together; we came together for this.”

Their common cause is to offer an entree into an art world that they say is generally unnoticed, brewing amid the brownstones abutted by multistory developments. Unlike the ground-floor galleries in walkable neighborhoods like Chelsea or SoHo, they say, many Harlem galleries are tucked into spots that don’t necessarily draw foot traffic.

“We’re just hidden — we are in a lot of private spaces,” Ms. Archer, of Canvas Paper and Stone gallery, said. “If you’re not a collector or in the art market, you wouldn’t know that we’re here.”

Ms. Archer and Ms. Orange, who began their tours in 2008, will expose Harlem’s hidden artistic gems on Saturday and Sunday with trolley-bus tours to seven stops, where gallery owners and artists will talk about, and create, their work. The tours end with a meal on the roof deck atop Rio II galleries.

One stop that exemplifies the gulf between the Harlem of old and new is Casa Frela, a gallery whose nervy exhibitions sit in an airy Stanford White brownstone.

In the 1990s and ’00s, “people used to talk about a new Harlem Renaissance, but that was really a real estate renaissance,” said Lawrence Rodriguez, Casa Frela’s director, who bought the space six years ago. The true renaissance begat a thriving scene whose artistic descendants still live and work in Harlem, he said, making it a multigenerational aesthetic haven unlike newer art enclaves in Williamsburg or Dumbo. “The old guard led the way for my generation,” he said.

Among the artists who defined the years between the renaissance and today’s gallery owners is the Weusi Collective, which was at the core of the black arts movement of the 1960s and ’70s. The work of that still-active collective is documented at another stop on the tour, the Dwyer Cultural Center. In a video accompanying an exhibition of the Weusi’s paintings, woodcuts and sculpture, Ademola Olugebefola, a member of the collective, says, “We set out to beautify the black woman, to regalize the black man.” Other members emphasize that theme, referring to themselves as “cultural warriors.”

Another stop suggests that the culture war has been fought and the victory decided: the Studio Museum in Harlem, in a gleaming building with three floors of exhibition space that is a far cry from the rented loft where the museum got its start in 1968. The main galleries feature photographs by Zwelethu Mthethwa, a South African. He is among the international figures on the ArtCrawl roster, which includes artists from the Dominican Republic, Japan and, well, Westchester. The tour suggests far more than the cradle of black culture that it first connotes.

That Harlem still draws a range of talent is notable, Ms. Orange said. “It is testimony to the fact that Harlem is still here, and we’re still the trendsetter.”

WHERE THE ART IS