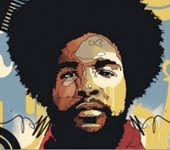 Editor’s Note: At Ebony.com we revel in exposing new and different voices. To that end, we’ve had an ongoing partnership with the folks at Black Web 2.0, who we think do amazing work. Today, we asked them to guest edit our site, so all the main features you see are also featured today as part of the BlackWeb 2.0 network.

We live in a culture that has enabled people to believe they know celebrities based on gossip blogs, tweets and status updates. The things we think we know have been filtered through rumor mills, taken out of context and embellished by people 1,000 degrees separated from the celebrity in question.

The Roots drummer and Jimmy Fallon’s bandleader, Ahmir “?uestlove” Thompson humanizes what we idolize: stardom and celebrity culture. The stories on the site are as crudely written as they are presented, yet there isn’t anything crude about the entries or the way ?uestlove recounts his-stories.

Questlove’s Celebrity Stories is housed on Hypnagogics, a site owned by Kenan M. Banks, a web designer and programmer. Kenan took the original stories, which were posted on OkayPlayer.com’s message boards, and created a platform for them on Hypnagogics. In fact, he designed it.

In an email, Kenan wrote me,

The original post can be found here, but note that it is VERY large and may break your browser:  http://board.okayplayer.com/okp.php?az=show_topic&forum=18&topic_id=131953&mesg_id=131953&page=2

As that post got big enough to break people’s browsers, I wrote a small program to scan the post for all of ?uestlove’s replies (he posts as 15 on Okayplayer sometimes). http://hypnagogics.com/questo is the result.

My favorite posts are

Corrine Bailey Rae “never met a sweeter person in life. she should be off limits to diabetics only female i worked on that wasn’t a nightmare”

Don Cornelius “‘YOU CAN’T STAND HERE’ he voice sounded like the jolly green giant. i moved.”

Nona Gaye “you best believe i wasted 0 time in talking to nona and her mom. jan said yonce reminded her of marvin in the studio with how effortless his harmony attempts were. i went the extra mile in asking about stories about her father. we got real real cool.” (There’s actually a lot more to this story and it is an amazing one.)

My absolute favorite was this one:

Here’s my preach: Too often we forget that the people we fawn over and follow on social networks are flesh and blood. Questlove’s celebrity stories could be your story or mine about the famous and the not-so famous. But it’s the spirit that I love. He’s not name-dropping. He’s not asserting himself as the star of the story. He also laughs at himself. He also indicts without self-righteousness as in the case of the journalist who ignorantly mistakes him for iconic rock drummer Buddy Miles. He’s either saying the person didn’t know music history or that they fell to the “they all look like” mentality. Maybe he was saying both but I love the way he says it. Kenan said that more stories will be added due to the popularity of his site with other celebs and ?uestlove who has even tweeted about them.