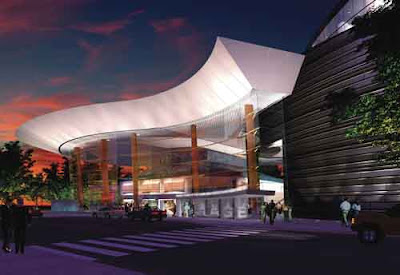 Having shined a White House spotlight on Broadway over the last year, President Obama and First Lady Michelle Obama are turning their attentions to theater closer to home. Arena Stage, the 60-year-old theatrical company in Washington, announced Thursday that the Obamas would be the honorary chairpeople for its inaugural 2010-11 season at its new home, the Mead Center for American Theater, in Southwest Washington. The Obamas will also serve as honorary chairs for an Oct. 25 black-tie dinner to celebrate Arena’s move into the Mead Center.
A spokesman for Arena said on Thursday that it was not known if the Obamas would attend the Oct. 25 dinner, nor was it clear what if anything their honorary designation involved beyond the title itself. The dinner is to feature a performance by the Tony Award-winning actor Brian Stokes Mitchell (“Kiss Me Kate”) on his Monday night off from his new Broadway musical this fall, “Women on the Verge of a Nervous Breakdown.” The fund-raising dinner will celebrate and support Arena’s work at the Mead Center, which encompasses the newly renovated 683-seat Fichandler Stage and the 514-seat Kreeger Theater as well as a new third stage, the 200-seat Kogod Cradle. The inaugural season in the Mead Center will include an Edward Albee Festival featuring two productions, of “Who’s Afraid of Virginia Woolf?” and “At Home at the Zoo,” as well as readings of Albee’s other works, as well as a revival of the musical “Oklahoma!”