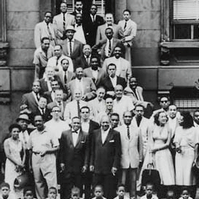 Harlem Stage announces its event listings for September. The three main events offers film, dance, and music for all.

On Wednesday, September 5th, Harlem Stage on Screen presents “I Remember Harlem” by Mill Miles. The film will be at 7:30PM athe the Harlem Stage Gatehouse (150 Convent Ave at W. 135th St.). Tickets are $10.

“I Remember Harlem” is a stunning look at the history of Harlem in a one hour compilation of the award-winning four part documentary that traces 350 years of African American culture. The film offers a glimpse of the dynamic culture of Harlem from the roots to a new day. It will be followed by a Q&A session with the filmmaker and reception. It is part of the Harlem Stage on Screen series and co-presented with the Black Documentary Collective as part of the Harlem Stage Partners Program.

Dance on Harlem Stage presents “Blood Dazzler” from Thursday, September 23rd through Sunday the 26th. There is a Sunday matinee performance at 3PM while all the other days have evening performances at 7:30PM. The event will be at the Harlem Stage Gatehouse. Tickets are $20.

“Blood Dazzler” is a dance/theater work based on the poetry collection by Patricia Smith; Conceived and created by Paloma and Patricia McGregor. Based on Smith’s award-winning book, “Blood Dazzler” embodies Katrina as a troubled, otherworldly woman hungry for fame, destruction and revelation. Katrina defied simple classification and easy analysis. Now, as her aftermath continues to be felt, a group of artists reexamines her origin and impact through a unique convergence of verse, dance, theatre and multimedia, in the hopes of unearthing deeper truth. It is co-presented with Angela’s Pulse as part of the Harlem Stage Partners Program. It will be performed by Cristal Albornoz, Eddie Brown, Rhea Patterson, Alexandra Houston, Tiffany Rachelle Stewart, Lizan Mitchell and Maria Bauman, as well as a special performance by Patricia Smith.

On Saturday, September 25th, Uptown Nights at Harlem Stage presents “WeDaPeoples Cabaret” at 9:30PM at Aaron Davis Hall (150 Convent Ave at W. 135th St.). Tickets are $20 for Cabaret and $35 for both Cabaret and Blood Dazzler.

The show is curated by Carl Hancock Rux and features Toshi Reagon, Helga Davis, Queen Esther, Greg Tate, Roger C. Jeffreys/Subtle Changes Dance Company, Preston Riddick’s drumming ensemble, DJ Phonozone and others. “WeDaPeoples Cabaret” was created in 2006 by Sekou Sundiata for the opening season of Harlem Stage‘s new home, The Gatehouse. In tribute to Sekou and in the spirit of Max Roach and Abbey Lincoln’s collaboration “WE INSIST: Freedom Now Suite,” Rux starts a revolution on the dance floor with a night of art and activism. The evening follows the performance of Blood Dazzler, features a special video presentation plus a dynamo of artists with DJ Phonozone spinning throughout the evening. It is co-presented with the Center for Jazz Studies at Columbia University and the Columbia Harlem Jazz Project with support provided by The America Project.

Harlem Stage is a performing arts center that celebrates and perpetuates the unique and diverse artistic legacy of Harlem and the indelible impression it has made on American culture. They provide opportunity, commissioning and support for artists of color, make performances accessible to all audiences, and introduce children to the rich diversity, excitement and inspiration of the performing arts.

More information about the events, tickets, and Harlem Stage itself can be found at its website: http://www.harlemstage.org/