Forget the Beaches, Trolley Tour Allows Art Lovers to do the Harlem Shuffle 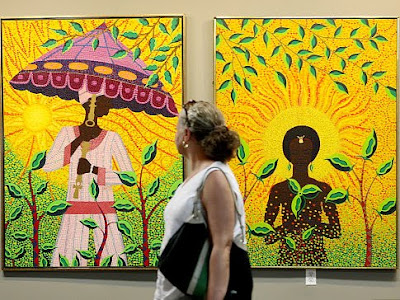 They had a trolley good time.

Forget the double-decker buses that wind through the crowded streets of midtown. The best way to sightsee in one of the city’s most culturally rich neighborhoods Saturday afternoon was via the ArtCrawl Harlem trolley.

About 100 people ignored the lure of the beach, the park or a casino, opting instead for a four-hour trolley tour of Harlem’s most treasured Renaissance and contemporary art exhibits.

As the tour pulled off from the famed Studio Museum in Harlem on 125th St., tour guide John Reddick began a steady stream of fun facts and local trivia.

One of the first stops was Casa Frela Gallery, housed in a brownstone at 47 W. 119th St.

“I don’t know if any of you have seen Beyoncé’s video, “If I Were a Boy,” but this is the brownstone where that was filmed,” Reddick said.

As the trolley passed the large, green statue of Harriet Tubman at 122nd St. and Eighth Ave., he noted that it is the only statue of an African-American woman in New York.

This was Reddick’s second year as an ArtCrawl tour guide and he finds that tourists feel more comfortable about actually getting off the bus and walking around Harlem.

“The ArtCrawl focuses on cultural interaction in Harlem,” Reddick said. “We want to show everyone the side of Harlem that you don’t get unless you’re apart of the experience.”

Most New York bus tours just ride through neighborhoods and past landmarks. Saturday’s tour actually stopped at several galleries, giving riders up to 30 minutes at each stop to explore showrooms and interact with artists.

At Casa Frela, artist and museum curator Ellen Fagan, put on art demonstrations in clay, inviting curious tourgoers to step up and participate in the creation of a new piece.

The colorful gallery also displayed works by artist Jackie Welsh, who uses domestic materials to craft her creations.
“I use mops, rugs, and kitchen and household items such as spatulas for my artwork,” she said.

One stop was Dwyer Cultural Center at 258 St. Nicholas Ave., which touts itself as including several rooms of works by Harlem-based artists.

Toward the end of the tour, the trolley stopped at Renaissance Fine Art gallery at 2075 Adam Clayton Powell Jr. Blvd., which featured “The Visual, Wearable and Functional Series” by Anton and Donna Dove. Dominating the exhibit was a live model posed in the middle of the showroom floor.

The ArtCrawl ended with a wine, food and music reception at the Rio Gallery II at 583 Riverside Dr.

“I was looking for something a little more interactive and focused,” said Smouha. “Harlem is just beautiful.”