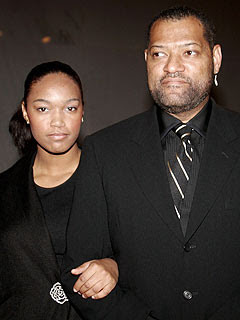 “Being in an adult film is not a big deal to me,” Montana Fishburne, 18, tells PEOPLE. “It’s something I always wanted to do. I have always been comfortable in my body and with my sexuality.”

The daughter of the CSI star, an Academy Award nominated actor, said she didn’t seek her parents’ approval before signing on for the film.

“I had already filmed it by the time they knew so I didn’t give them a chance to talk me out of it,” says Montana, who moved out of her father’s house last year upon turning 18, “so I could pursue what I want to do without being constrained by them.”

Her father is understandably devastated, she confesses.

“I hear through relatives that he’s upset but I haven’t talked to him directly for him to tell me his feelings,” she admits, saying that when she did break the news, he reacted with stunned silence.

“I hope it’s not hurting him. It wasn’t done to hurt him,” she says. “But I think it will take time and talking through the issues. Eventually, I hope he will be proud of me.”