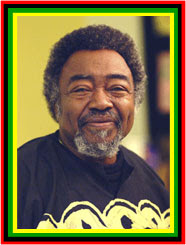 Askia M. Toure’ is one of the pioneers of the Black Arts/Black Aesthetics movement
and the Africana Studies movement. Toure’, a modern renaissance man, is also a
political activist, having served with the Student Non-violent Coordinating Committee’s
Atlanta Project; and is a co-author of SNCC’s “Black Power Position Paper” (featured
in the New York Times)s, which influenced the movement of the Civil Rights Movement
towards the Black Power revolution.

In 1967/68, in both the San Francisco Black community, and at San Francisco State
University, Mr. Toure’ taught African history in the first Africana Studies program
located at a majority university. Among his fellow professors were celebrated writers,
Amiri Baraka and Sonia Sanchez, guided by the eminent educator, Dr. Nathan Hare,
who later became department head, when a department was established. Additionally,
as an educational activist, Mr. Toure’ was an organizer of the historic Nile Valley
Conference (which spearheaded the movement to restore the Nile Valley as the source
of Western Civilization) at Morehouse College in 1984, and was a co-founder of the
Atlanta Chapter of the Assoc. for the Study of Classical African Civilizations in 1986.

In the field of literature, Mr. Toure’ is a co-founding Architect of the eminent Black Arts
Movement which revolutionized African-American literature with the creation of an
ethnic-based Aesthetic. An internationally published poet, he is featured in a host of
anthologies, and is the author of five books, including “From the Pyramids to the
Projects,” winner of the 1989 American Book Award for Literature. Internationally, his
work is published in reviews in France, Italy, India, and in the Peoples Republic of
China. In 1996, Askia Toure’ was awarded the prestigeous Gwendolyn Brooks Lifetime
Achievement award from the Gwendolyn Brooks Institute in Chicago. His most recent
volume, “Dawnsong!” was awarded the distinguished Stephen Henderson Poetry
award from the African-American Literature and Culture Society, an affiliate of the
American Literature Assoc. Currently, Mr. Toure’ is completing a number of projects
linked to his continuing in the above related fields, including an independent film,
“Double Dutch: A Gathering of Women,” whose director won “Best Director” at the
2003 Roxbury Film Festival (the screenplay was written by Mr. Toure’, based upon
his earlier play); and, working with Boston composers in creating a Libretto from his
epic poem, “From the Pyramids to the Projects, From the Projects to the Stars.”
Additionally, Askia Toure’ is appearing in a forthcoming BAM documentary.

“Askia Toure’, the unsung poet laureate of cosmopolitan Black Nationalism, one-ups
Claude McKay’s and Countee Cullen’s ideas about Africa with his “Dawnsong!”
Unlike members of the Harlem Renaissance (with the possible exception of Langston
Hughes), whose knowledge of Africa was misty, and whose preferred destination was
Paris, the black writers of the 1960s wrote in African languages and visited Africa.”

“Toure’ was politically advanced. In the early days of the Umbra Workshop, he was deeply aware of the need to liberate African peoples everywhere in the world. At a time when most of us were much more concerned with what was passing in Alabama and with the contested rights of black people to participate in American Democracy, Toure’ had on his wall for ready reference a lecture hall-sized map of Africa…In the context of the Umbra group, Toure’ was an opener of directions and new fields of thought. African American popular culture, as vital expression of ancient traditions, was unself-consciously admitted to his poems… Nevertheless, Toure’s poetic tone begins with the Psalms and the manner of the gospel preacher who read them to us in church. In his rhythlmic language, Toure’ is always ” [limning] out” a better future. His major poetic figure has always been Apocalypse–sometimes in the image of fire, always in the sense of greater knowledge being awakened in us…His style of presentation (closely approximated by the Last Poets), like that of the Psalms, was never “dramatic reading” but very nearly song…”