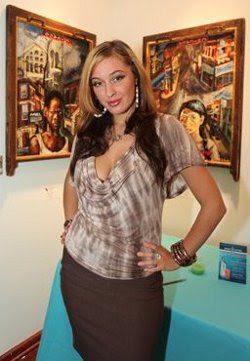 The Academy Award does not have an award category for, “Artist who brings diversity to the Arts.” If they did have such a category, the beautiful and talented Daria Amerik of Chicago, Illinois will win, hands down.

This hardworking and fine art major from the School of the Art Institute in Chicago has made a name for herself in the fashion and art industries. Daria’s artistic portfolio is not only pretty widely spread, she also maintains a unique style. She has exhibited her work in galleries, art centers and museums nationally and has also created a jewelry line called ICANDI. She currently operates a showroom for her jewelry line in the Chicago’s South loop area, and coordinates special events to feature other artists. According to Daria, “I started drawing as early as 3rd grade…. I came here from Russia as a child. I didn’t know English so drawing was my only way to communicate with my fellow classmates…. it all started there and I have been doing art professionally now for over ten years.”

Thanks to Facebook; because Daria is a friend of a friend, I sent her a friend request. In her Facebook profile picture at the time, she was standing in front of two beautiful artworks that immediately caught my attention. The intent of my friend request was for one reason and that was to ask couple of question – “What is the name of the artist that did the work you are standing in front and where was the picture take? To make a long story short, Daria’s picture was taken while she was at the Gallery Guichard Fine Art Gallery on 3521 South King Drive, Chicago and she was standing in front of works that were created by those gifted hands of hers.