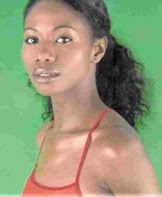 Born and raised in Chicago, IL., Dana struck the artistic nerve early on. Having never taken a single painting lesson, her gifts, she proclaims, are a testament from God that reminds her to remain humble. She proudly states, “It’s the first thing I knew I could do well and I know it’s what God made me to do.” The focus of her ingenuity is African-American children and families.

Aiming to build and articulate pride in one self, she proclaims is her foremost inspiration.While distinctively displaying her thoughts and emotions on canvas, Dana Todd becomes the flare that guides any brush she embraces. Dana is sure to be the next big thing in the art world. Creatively affirming the African- American family and its age old tradition at its best, she has proven that she can be versatile in any genre of her craft. From modeling, to acting, to designing, this rising young artist is the perfect quadruple threat.

Some of Dana’s current clients include artist, songwriter, and producer AnthonyHamilton and patrons of prominent art gallery in the historical Bronzeville neighborhood of Chicago, Gallery Guichard. In early 2007, Ms. Todd had the privilege of showcasing and selling in the National Black Fine Arts Show (NBFAS) in New York City. From the five thousand works in NBFAS, she had the honor of her painting, “Knowin’ Where I Come From,” be one of twenty pieces selected by Macy’s New York. She was featured in an exhibit amongst the works of acclaimed artists Charles White, Barkley Hendrix, and Robert Graham Carter in Macy’s Herald Square store. This Summer Ms. Todd debuted and sold at another major show, “Embrace,” held at the Mason Murer Gallery in Atlanta, Georgia.

On November 18, 2007, Dana was named Grand Prize Winner of the A.R.I.S.E. (To Actively Raise and Inspire People to Successfully Build Businesses with Excellence) Business Plan Writing Competition held by The Salem Baptist Church Of Chicago partnered with The Chicago Urban League. She won $5000 seed money for her book publishing company, a business consultant and a one year membership to the Chicago Urban League.