Why African-American Art Is So Hot 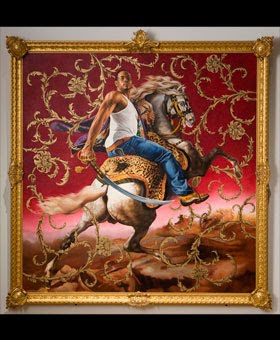 Hanging in Robert Johnson’s den is an oil from the 1930s by an African-American artist named Palmer Hayden. The painting depicts a black American businessman getting his shoes shined.

The subject is nattily dressed in suit and spats, a little like Johnson himself, who is sporting a crisply pressed blue shirt and a shiny yellow tie.

Johnson may be known for the low-budget comedy routines and booty-shaking music videos that drove the success of BET, the cable channel he founded that turned him into America’s first black billionaire in 2001.

But in his private moments he is moved by art that documents the struggles and achievements of black people in America. Since the early 1980s Johnson, 62, has assembled some 250 pieces by 19th- and 20th-century African-American artists.

Though Johnson’s collection is probably worth only a couple of million dollars, it includes some of the most famous names of the genre: cubist-inspired collage artist Romare Bearden (1911-­88); modernist Harlem painter Jacob Lawrence (1917­-2000); and Henry Ossawa Tanner (1859­-1937), who studied under Thomas Eakins in the 1880s and was the first black painter to gain international acclaim.

Son of a Mississippi factory worker, Johnson started his channel in 1979 with a $500,000 investment from John Malone. He sold it to Viacom in 2001, receiving $1.5 billion in stock for his 63% share. Today he owns an NBA team, North Carolina¹s Charlotte Bobcats, and runs RLJ Investments in Bethesda, Md., which includes hotels, car and motorcycle dealerships, a bank and a nascent hedge fund and private equity arm. (Johnson’s current net worth: perhaps $700 million.)

In Pictures: Where To See African-American Art

Though mainstream museums and galleries have been slow to appreciate work by African-Americans, the black community has been collecting for decades.

“What’s happened in the last five years is a paradigm shift,” observes Steven L. Jones, 61, an African-American dealer in Philadelphia. “This means that the best work is going up exponentially in value.”

Johnson bought most of his art in 1998, when he learned that a significant body of work, the Barnett-Aden collection, was for sale by the Florida Education Fund, along with the building where the art was housed, the National Museum of African American Art, in Tampa. Johnson acquired 222 pieces, including 68 drawings, paintings, prints and sculptures from the original gallery. The rest of the pieces, all by black artists, were added by the museum. Johnson says he doesn’t recall what he paid, but a dealer familiar with the sale pegs it at $400,000. Two dealers who know the collection say it’s tripled and possibly quadrupled in value in the last decade.

Prices continue to climb for quality pieces, even while other collecting categories founder.

Johnson, who plans to stage a Washington, D.C., exhibition of his art this February, believes the works should be displayed separately from those of white Americans.

“This is work by artists who were influenced by the fact that they were African-Americans living in America and dealing with all that that means,” he argues.

Sometimes they provocatively exploit racial stereotypes. Example: a 1940 canvas hanging in Johnson’s office by Archibald Motley. Called “The Argument,” the painting depicts a street scene and a couple of men who look like minstrels in blackface, with oversize red lips. Johnson doesn’t have a problem with this picture.