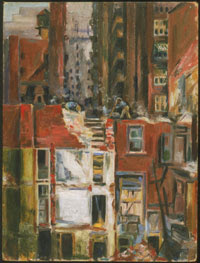 Dox Thrash was born in 1893 in a small cabin on the outskirts of Griffin, Georgia. Having left home as a teenager, he later depicted many nostalgic scenes of childhood in his prints. In many he uses a printmaking process that he himself helped develop in late 1937. Although the new method was named after Carborundum, the commercial abrasive used in the process, for a brief period Thrash called it the “Opheliagraph” in honor of his mother, who died in 1936.