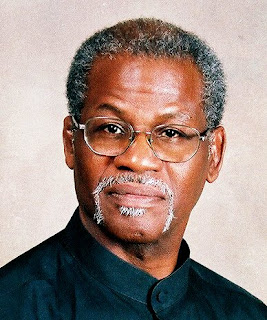 We are sorry to announce the passing of our loving father Larry O. Brown. We would like to thank you all for the hundreds of prayers we received on his behalf. May he rest in peace, he will be greatly missed. Larry Poncho Brown

Here was the bio for Larry Poncho Brown’s father:

Born and educated in Baltimore, Maryland, Larry O’Neill Brown, Sr. is a self taught artist who has been drawing and painting for four decades. After working in the printing industry for thirteen years as a linotype operator, he pursued a career in education in 1976. From his lineage swawned two generations of artists. His son, Larry “Poncho” Brown and his grandson Mandela Eric Brown. He received a masters degree in career and technology and was certified as a printing instructor with Baltimore City Public Schools. He was an accomplished track and field coach in both high school and college levels. Brown is presently teaching and coaching wrestling at Lake Clinton-Eastern High School. He has been a teacher for 27 years. Although he has had two artistic beginnings (1960-1976) and (1996 to the present) he has always wanted to be recognized as an accomplished artist. During the early part of his education career and his interest in coaching, his intensity in art had slowed, but being a graphics arts teacher allowed him to use his skills in art in a different but related manner. He realized African American artists were not given the respect and appreciation for their creations in the 1960’s and 1970’s, “with the advent of Black pride, the civil rights movement and socioeconomic gains, African Americans now embrace images that are reflective of who they are.” He has enjoyed his resurgence in the art scene. His images depict the strength and beauty of African American life. Brown’s subjects range from figurative renderings to simple abstracts. He prefers to work with acrylics on various base materials, but he also uses pen and ink, oil pastel and collages to produce his images. “I am perpetuating the gifts that God gave me to delight the eyes of others.”