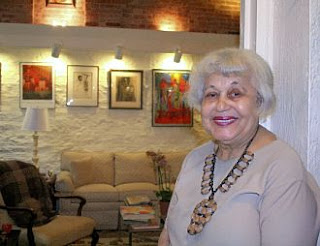 Vivian Hewitt turns 91 on Feb. 17, but she seemed unfazed last week about leaving her Upper West Side apartment in snow-buried New York City to travel here this week to talk about her lifelong passion.
Mrs. Hewitt, a New Castle native who was the first black librarian in Pittsburgh, went on to make a mark in the world of African-American art with her late husband, John.R
Through their travels, family connections and friends in New York, they amassed one of the most renowned collections of African-American art, which today serves as the cornerstone of the Harvey B. Gantt Center for African-American Arts+Culture in Charlotte, N.C.
But she’s coming here to talk about the 40 pieces of original Haitian and other African-American art they donated over the years to Geneva College, her alma mater.
Formerly scattered across the Beaver Falls campus in McCartney Library, Alexander Hall, and various faculty and staff offices, the pieces will be on display together in the upper level of the Student Center in Skye Lounge. The exhibit will be free and open to the public 6 to 8 p.m. Wednesday, 8 a.m. to 9 p.m. Thursday, and 8 a.m. to noon Friday.
Mrs. Hewitt is scheduled to speak at 7:30 p.m. Thursday in Skye Lounge.
The art collection happened by chance, she said last week. She met her husband when she was a librarian and instructor at Atlanta University (now Clark Atlanta University), and he was an English teacher at nearby Morehouse College. They married in 1949, and looking for ways to decorate their faculty suite, they picked up a print at a New York City museum during their honeymoon there.
They soon started purchasing original Haitian art, traveling to the Caribbean country from 1960 to 1965, as well as works by black and folk artists in Mexico and other places. Although both drew modest salaries, they made a point in giving each other original art on every gift-giving occasion.
When they moved to New York City in 1952, they visited galleries and shows and were introduced in the waning days of the Harlem renaissance to the Market Place Gallery, which was operated by Mr. Hewitt’s sister, Adele Glasgow. There they became friends with black artists and began collecting work that hadn’t yet hit the mainstream.
“We started investing in our own heritage and culture,” said Mrs. Hewitt. “Their work was affordable then,” she said of the black artists.
Among the pieces in their collection at the North Carolina center are works by Romare Bearden, Henry Ossawa Tanner, Elizabeth Catlett, Jonathan Green, Jacob Lawrence, Ann Tanksley, Hale Woodruff and Margaret Burroughs.
Mrs. Hewitt says an article in The New York Times in the early 1970s put a spotlight on the emerging prominence of African-American art, which was beginning to be purchased by white collectors.
“In essence it said that African-American art was here to stay, and [collectors] better get on the bandwagon,” she said last week. “It was a turning point for people recognizing the importance of African-American artists. Because of racism and the tenor of the times, this is what happened to exist.”
In 1998, Bank of America acquired the John and Vivian Hewitt Collection of African-American Art. The exhibit toured the United States for 10 years during construction of the $18 million Gantt center in North Carolina that became its permanent home in 2009. Mrs. Hewitt, in her late 70s and 80s by this time, visited the 25 to 30 cities on the tour. Her husband died in 2000.
Earlier in her life, of course, Mrs. Hewitt was a pioneer in Pittsburgh. She earned a bachelor’s degree from Geneva in 1943 and a master’s in library science from the Carnegie Tech Library School (later folded into the University of Pittsburgh). She was the first black librarian hired by Carnegie Library and worked at the Hill District and Homewood branches before moving to Atlanta.
She’s particularly proud of the couple’s contributions in bringing awareness to black artists.
Today, she said “there are fine African-American artists in every region of the United States.”