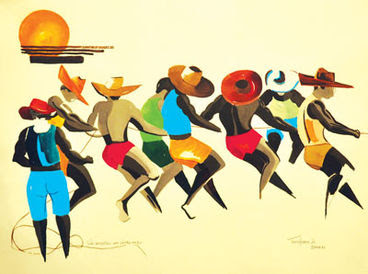 BEAVER FALLS — Vivian Hewitt was a librarian, and her husband, John, a freelance writer; not necessarily jobs one would associate with the pricey world of art collection.

Yet through the decades, the Hewitts steadily amassed an assortment of art that caught their fancy, and one day would be deemed one of the finest collections of African-American art in the world.

The works that Vivian, a New Castle native, and John, a New Yorker, had bought to celebrate their milestones and to support the emerging artists they befriended eventually would tour the nation while becoming the cornerstone for the new $18.5 million Gantt Center for African-American Arts and Culture in Charlotte, N.C.

The Hewitts set aside 40 pieces for donation to Geneva College, from where Vivian graduated in 1943. Those pieces have been spread among classrooms, faculty offices and McCartney Library on the college’s campus.

This week, for the first time, those paintings and sculptures will be exhibited under one roof for a public show, “The Vivian Davidson Hewitt Collection: A Multicultural Legacy.”

The three-day exhibit starts Wednesday in the upper level of the Student Center in Skye Lounge. Hewitt, who turns 90 next month, will fly in from New York to lecture Thursday on the artworks that she and her late husband loved so dearly, and were eager to share with the public.

“To see the works of such talented people is an experience,” she said. “It’s joyful.”

Chatting by phone from her Upper West Side apartment in a neighborhood nicknamed “Park Avenue West” — it wasn’t so swanky when she and John moved there in 1964 — Hewitt said she hasn’t visited Geneva in nearly 10 years, since her son, a retired doctor, belatedly was presented a degree he had bypassed after leaving Geneva after his junior year.

“I’m so excited to return,” said Hewitt, who majored in French and psychology at Geneva, continuing her education at the then-Carnegie Tech in Pittsburgh, where she earned a master’s degree in library science.

In 1944, the Carnegie Library in Pittsburgh hired her as a senior assistant librarian. Five years later, she took a similar job at Atlanta University and met her future husband.

Hewitt’s lecture Thursday will focus on the art of collection, flavored with stories about her and John’s exhibited works, “how we got them, and why they appealed to us,” she said.

The paintings include Montas Antoine’s “Church Scene,” known for its colorful street and rural scenes in contrast to our normal view of a poverty-stricken Haiti. The collection also includes American paintings such as Don Davey’s “China Town” and “San Francisco Bay Bridge,” and English paintings such as William Palmer Robin’s “Acquisition” and “Butchery Lane.”

As newlyweds in 1949, the Hewitts bought their first piece of art, a reproduction of a painting by the then-active Pablo Picasso.

The Hewitts bought their first original painting in 1960 while on a two-week vacation in Haiti. Touring the Caribbean nation’s countryside, they became earnest admirers of the Haitian art scene, acquiring many more works there on periodic visits through 1985.

As lovers of travel, the Hewitts bought art wherever they roamed. Back home in New York, where Vivian Hewitt had gone from being a researcher for a publishing firm to the chief librarian for the Carnegie Endowment for International Peace, the Hewitts became friends with many of the talented African-American artists in their neighborhood.

“By the 1970s, they were opening their home to showcase the work of Hale Woodruff, Ernest Crichlow, Alvin Hollingsworth and J. Eugene Grigsby,” says the Gantt Center website. “Grigsby, a cousin of Mrs. Hewitt’s, is an artist and internationally acclaimed art educator who also introduced the couple to numerous artists, many of whom wrote personal inscriptions or notes on the pieces the couple purchased, increasing their value both monetarily and sentimentally.”

Rochester Township artist Elizabeth Douglas, a professor emeritus at Geneva who was mentored by Hewitt, visited the couple’s New York home when their art collection was still intact.