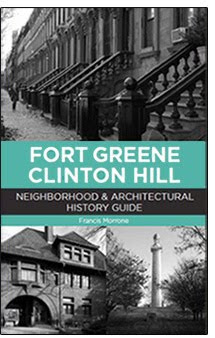 Walt Whitman, Spike Lee, Marianne Moore, Richard Wright and The Notorious B.I.G. may not have much in common other than the ability to capture human experience through words and images but they all spent formative years in Fort Greene and Clinton Hill. “Leaves of Grass” was written at 99 Ryerson Street; “Native Son” was penned on a bench in Fort Green Park, and many scenes from “She’s Gotta Have It” were filmed in the neighborhood.

“Maybe more so than any other part of New York of that size, the neighborhood is a microcosm,” Mr. Marrone, told The Local over a cup of tea at a café in Park Slope, where he lives. “It has everything. It has rich and poor, black and white going back to the neighborhood’s very beginning –- which is highly unusual for a northern American city.”

Whether he is tracing the rise of Greek and Gothic revival villas in the early 1900s from archival materials, or exploring the many African-American artists, musicians and writers who have called the neighborhood home, Mr. Morrone is nothing if not fastidious.

“I love nailing dates and also addresses,” he said. “I love the whole process of finding where everyone lives. Sometimes I spend days just tracking down an address, and sometimes if it can’t be tracked down, I become almost suicidal.”
The densely-packed guide is not especially easy to navigate, and Mr. Morrone’s phrasing is sometimes quaint. Mansions are “splendiferous” and the seating at outdoor cafes “enhances the charm of the street.” But his latest project is also chock-full of original research and historical nuggets that paint a vivid picture of Brooklyn’s diversity and explosive growth.

He also invokes first-hand sources, including newspaper articles by Walt Whitman, who moved to a small wooden house in a working-class section of Fort Greene in 1855. In the Brooklyn Daily Eagle, Whitman compared a bustling Myrtle Avenue to Manhattan’s Bowery Street and noted the “good natured brightness” of the Irishmen living in nearby shanties. “From Raymond to Fulton Street, all is the clattering din of traffic, turmoil, passage and business,” the poet wrote.

The new volume traces not just the history of the neighborhood, but also the history of the borough. City records show that in 1800, a mere 5,740 people lived in King’s county –- a quarter of them slaves. Fifty years later that number had mushroomed to 138,882. By the Civil War era, the City of Brooklyn -– now a mecca of the textile, book printing, shipping, oil refinery, and metal works industries -– was the third largest city in the United States.

“As a historian, I am fascinated by transitions,” Mr. Morrone said. “I was interested in Fort Greene particularly in the mid-sixties, when there was a lot of crime and poverty.”

A 1966 New York Times article described a frightened Marianne Moore fleeing the neighborhood that had been her home for 37 years as her building became increasingly unsafe. Yet this was hardly the first time the area had experienced a decline. In the 1930s, rows of brownstones were converted to rooming houses. A decade later, Gilded Age mansions were torn down to create housing projects that soon fell into disrepair.

“What fascinates me is all the stuff The New York Times didn’t mention,” Mr. Morrone said. “In this case, it was that at the very moment when Marianne Moore moved out Herbert Scott Gibson bought a house with his wife and began researching the history of the houses in Fort Greene. This didn’t sound like ‘Twilight of a Neighborhood.’ It sounded like people engaging the neighborhood in a new and unexpected way.”

“There is the whole story of decline and revival,” said Mr. Morrone. “Just about everything that happened to American cities in the last 200 years has happened in Fort Greene and Clinton Hill. It really is the story of the American history, and not just the story of these neighborhoods.”

Morrone enjoys digging up little-known facts from what he terms “the periphery of history,” and has invoked new technologies to do so. The guide also features an audio walking tour that is scheduled to be available as a free podcast on iTunes, and on the Brooklyn Historical Society’s Web site for the Thursday launch.

He also believes that online databases have transformed the way historians conduct research of archival materials such as newspapers.

“Back in the day, you could only find a fraction of what you were looking for,” Mr. Morrone said. “You had to be dependent on what were deemed ‘key words.’ Now you can create your own key words via engines such as ProQuest. It’s revolutionary.”

“You can actually find things that before you could never find,” he said. “This is going to cause histories to be rewritten. I am absolutely besotted with newspapers.”