King of the rings returns 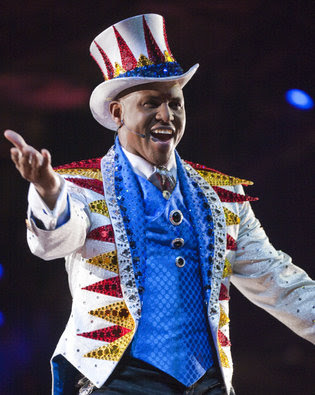 When Johnathan Lee Iverson joined Ringling Bros. and Barnum & Bailey shortly after graduating from college in 1998, he was the first African-American to take on the role of ringmaster, as well as the circus’s youngest emcee ever.

A singer first, the New York City native was a member of the famous Boys Choir of Harlem and had actually auditioned for a dinner theater role when the circus’s director, who happened to be directing the dinner theater, offered him a chance to travel the world and perform for millions.

“Nobody thinks about running away with the circus (except) clowns. That’s been their life’s mission, to work for Ringling Bros,” says Iverson, calling from Miami. He remembers seeing the circus repeatedly as a child. “The show to me back then was so overwhelming. I didn’t consider the ringmaster. The ringmaster gets lost in the melee of it all when your coworker is a 10,000-pound pachyderm.”

Starting Wednesday, Iverson hosts FUNundrum, a tribute to P.T. Barnum that celebrates the 200th anniversary of his birth.

“It’s incredible. I almost call it our Supergirl show. We have these women in this show who are doing unorthodox things,” says Iverson, citing the Torres Family, Duo Fusion, and Andrea Ayala Raffo, a fire twirler and third-generation hair-hanger, as examples.

FUNundrum marks Iverson’s return to the circus after a five-year break.

“I was doing the hungry artist thing,” says Iverson who juggled unemployment with work in commercials, theater, voiceover gigs, and freelance writing. When Ringling Bros. offered him his old job back, he jumped at the chance. “There’s nothing else outside this for me, unless I run for office, that provides the same stimulus and fun.”

The father of two’s political interest stems from his concern with education in the United States.

“We’re going into the global economy. We have to be able to stand and compete and be counted,” says Iverson, who is learning his dancer-wife’s native tongue, Portuguese. He’s glad his children are being educated on the road.

“The kind of education my children are getting here – traveling this country and going to school at the small class size, where we live with their teachers and the nursery staff. This is such a tight-knit community. Everybody knows everybody’s child. If my son walked outside right now, I wouldn’t worry. He has 300 people watching him.”

His love of the “Greatest Show on Earth” extends beyond the family-like community. He’s in awe of the performers. “When I left the show for five years, I realized that there’s Ringling Bros and the art of circus and then there’s everybody else,” he said. “I love Sean Penn and Halle Barry and Nathan Lane and Denzel Washington, but they have multiple takes to get it right.

“Here you’ve got one shot. If you get it wrong in the slightest way, it might cost you your life”