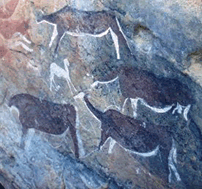 South African has a rich history of art with the oldest art objects in the world being discovered in a South African cave. Dating from 75,000 years ago, these small drilled snail shells could have no other function than to have been strung on a string as a necklace. The scattered tribes of Khoisan/San/ Bushman peoples moving into South Africa from around 10000 BCE had their own fluent art styles seen today in a multitude of cave paintings. They were superseded by Bantu/Nguni peoples with their own vocabularies of art forms.

New forms of art evolved in South Africa in the mines and townships. A dynamic art evolved using everything from plastic strips to bicycle spokes. Add to this the Dutch-influenced folk art of the hardy Afrikaner Trek Boers and the urban white artists earnestly following changing European traditions from the 1850s onwards, and you have an eclectic mix in South African art which continues to evolve today.