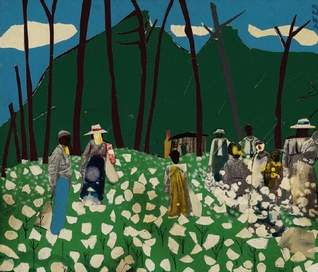 The artists featured at Monroe Community College have a great deal to say about the African-American experience.
It’s a small miracle that they got to say it in the group exhibit that just reached MCC’s Mercer Gallery.
Washington, D.C., lawyer Stuart Bloch was one of the first collectors to focus on black American art. In the 1970s, he began buying works by Romare Bearden, Robert Freeman and other then-obscure masters.
He named his treasures The Freedom Place Collection after his Washington home, a stop on the underground railroad. But for years, he kept most of the art in a Cincinnati vault.
A Rochester native who knew him took decisive action.
“I told him: ‘This is nuts, you’re hiding all this stuff!'” says Margery Goldberg, who owns the Zenith Gallery in Washington. “We decided to exhibit it at the Zenith in September 2007. We got an unbelievable response and huge quantities of publicity.”
The collection has been touring ever since and reached Mercer Gallery last week.
This medium-sized exhibit space scored a coup in hosting this outstanding show, which will play a high-profile role on campus.
MCC students helped hang the paintings and will act as docents next month when high school students tour the exhibit. Mercer also will host related Black History Month activities, including a Wednesday speech by Freeman.
Read More >>>>>