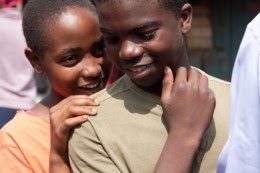 The new documentary by Kenyan filmmakers Michael Wanguhu and Russell Kenya premiered at the Pan African Film Festival in Los Angeles this year. It proved to be a good year for Kenyan film, with eight films set in the country.
Ni Wakati is a documentary that deals with issues including the state of hip hop, connections between Africans and African Americans, and the struggles between commercialized and conscious hip hop.
Woven into the story are interviews with American hip hop scholars and activists Davy D, Toni Blackman, M1 (of Dead Prez), and Umi (of P.O.W). Also featured are numerous hip hop artists and activists in East Africa, such as Binyavanga Wainaina, Kama (of Kalamashaka), Zavara (of Kwanza Unit), and former Black Panthers Charlotte O’Neal, Pete O’Neal, and Geronimo Ji Jaga.
The film follows African American hip hop artists M1 and Umi as they travel to Kenya and Tanzania to meet with artists there. The audience gains an understanding of the dangers East African hip hop faces if it follows the footsteps of the American scene. Socially-conscious artists from all three countries discuss the commercialization of hip hop and the values which artists from all three countries share.

Many of the Kenyan artists in Ni Wakati are familiar to viewers of Wanguhu’s first film, Hip Hop Colony, which dealt with the Kenyan hip hop scene.
Members of Kenya’s Ukoo Flani Mau Mau were featured in the first film and return in Ni Wakati, which, unlike Hip Hop Colony, focuses primarily on socially and political conscious artists. Ukoo Flani Mau Mau was founded by the pioneering hip hop group Kalamashaka and consists of several artists from the Dandora slums of Nairobi.

From Kenya, the film moves on to Dar es Salaam, Tanzania where we also meet artists from that country’s hip hop scene. It culminates in an important discussion between the American, Kenyan and Tanzanian artists at the United African Alliance Community Center (UAACC) in Arusha, run by former Black Panthers Charlotte and Pete O’Neal.
According to the filmmakers, there are plans to organize fundraisers in the United States to help ongoing projects in East Africa. In Dandora, Ukoo Flani Mau Mau is in the process of building a studio, and funds are needed to help complete the project. In addition, the UAACC needs money to buy a bus to help with the services the centre provides in Arusha.
In an interview with one of the filmmakers, Michael Wanguhu, it was clear that one of their goals was to tell the story of hip hop in East Africa, not just as entertainment, but as a tool to empower and mobilize the youth and to give a voice to a segment of the population often overlooked.
Wanguhu himself grew up as part of a global hip-hop generation and has had an interest in art since primary school. His entry into documentary filmmaking was sparked by the 1997 documentary Rhyme & Reason. After graduating from the New York Film Academy, Wanguhu returned to Kenya and was inspired to tell the story of the nation’s hip hop performers.
Read More >>>>>