Brenda Simmons Is a ‘Woman of Distinction’ 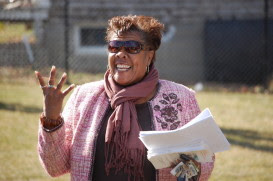 For all her works in Southampton and the greater area, resident Brenda Simmons received the Woman of Distinction Award from Suffolk County Legislator Jay Schneiderman on March 28 at the sign unveiling of the East End African American Museum and Center for Excellence, where she is a founding member and museum curator.
Not only is she a co-founder of this community museum in Southampton Village, which demands much of her time, she is the assistant to the village Mayor Mark Epley, has her own show on LTV called “Voices of Wisdom,” is a life coach for young woman in need and a mentor for inmates at the Riverhead Correctional Facility.
In 2005, Simmons, Bonnie Cannon and Gloria Cannon co-founded the museum which showcases historical events and people in a variety of locations around town. Simmons said Gloria Cannon came up with the idea and “Bonnie and I took the ball and ran with it.” They went to Southampton Town and asked what steps they needed to take to startup a museum.
Since at that time they did not have a building, they created a virtual museum, meaning exhibits were set up in different places around Southampton Town. They have had exhibits in Southampton Village Hall, Southampton Town Hall and have collaborated with the Parrish Art Museum on The Hamptons Black International Film Festival.
The exhibitions Simmons curates feature various events, such as Black History Month and have collaborated with the Southampton public schools for essays and artwork from students.
Now, this virtual museum has a home at the old barber shop located at 245 North Sea Road. The building still needs massive renovation before the museum can move in. Simmons went through the process of getting the site historically designated by the Southampton Village Board of Historic Preservation and Architectural Review and by the town of Southampton. With the designation, they are moving forward to restore the building.
Even with all that on her plate Simmons has managed to keep up with all the other activities in her life.
She has her show “Voices of Wisdom” that talks about “Realationships” on LTV and now on Cablevision’s channel 20. The show is meant to be “informational, education and controversial,” Simmons said. For her first show she brought on her best friends and interviewed them to show the audience what real life-long relationships are about. “My whole thing is based on real relationships,” she said.
She has had her 14-year-old granddaughter on the show to talk about sexting and bullying, she has read her own poetry on the show and for her next segment she is interviewing a woman who is a self-esteem expert.
Over the last 10 years Simmons has also been a mentor at the Riverhead Correctional Facility where she “renews inmates minds and makes sure their butts don’t get back in there.”
“It’s been very different,” she said. “You get in there and there is a whole different world behind the bars. They have their own communications. There are some really talented and educated people in the jail.”
“If I hadn’t changed my life then I might have been part of that system,” she went on to say. “I guess that’s where my compassion comes from.”
She said she’s been involved with the community forever. One more thing she does to contribute is being a life counseling coach with LIFE, Living In Full Empowerment.
She teachers young women how to be good mothers and how to get their lives back on track.
The people closest to her have much to say about her character and community involvement.
“She represents me, the village, the office in a very professional and courteous manner,” Epley said. “She has an incredible way with people. [I admire] her initiative on starting the museum. It’s been a difficult process and she’s continued to follow through with it.”
“She has raised two phenomenal daughters and she just really is a role model for a lot people,” he added.
Nancy Stevens, who has been a lifetime friend of Simmons said, “She is a person who has great character. She is a giving person and she gives without personal motive. She has a genuine concern for people and she is a hard working young lady.”
Read More >>>>>>