Telling the History of Black Percussion Through Art and Dance 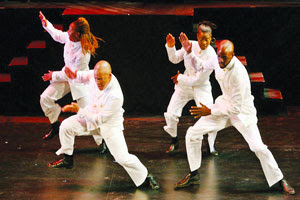 When the drum was banned during slavery in the United States, it was seen as a weapon, a powerful instrument that could send messages to incite the Africans in bondage to rise up and revolt against their enslavers. And so the drum was “taken away.” Intonations of this pivotal time in African American history became part of the script for Washington’s first and only Cultural Ambassadors, Step Afrika! during its amazing recent production, “The Migration: Reflections on Jacob Lawrence.” Dancers circled the rounded stage at the Atlas Performing Arts Center, telling the audience “they took the drums away.” But by no means did that put an end to the innovative use of percussion by African descendants in the Americas, and Step Afrika! eloquently illustrated the transformation of the drum to percussive dance steps which is now known as stepping.

Using the impetus of another Washington icon, the paintings by Jacob Lawrence known as the Migration Series, owned by the Phillips Collection, Step Afrika! added a narrative performance to enhance the story told in the 60 colorful panels Lawrence painted between 1940 and 1941 when the artist was only 23 and living in Harlem. The paintings follow the story of the Great Migration, when freed slaves traveled up north, mainly by railroad, to find a new home in the urban centers of the East Coast and Midwest providing manpower for the burgeoning industrial revolution and creating a culture that endures and is evident to this day. The entire series is owned jointly between the Phillips Collection and the Museum of Modern Art in New York.

Opening with “Go West: circa 1830” a rousing traditionally inspired dance to the beat of the West African Djembe drum, the dancers dressed appropriately in period costumes, and as noted by Frederick Douglass in his autobiography, danced and sang in a manner which “would make the dense old woods, for miles around, reverberate with their wild songs, revealing at once the highest joy and the deepest sadness.” Because the slave owners and overseers eventually realized that religious rituals were being practiced as well, the drum was banned and Africans had to discover new ways to continue an ancient tradition.

Against the backdrops of Lawrence’s simple but powerful paintings projected onto a half dozen screens, interspersed with historical photos, the dancers illustrated rhythmically, how the drum was replaced by hand clapping and stomping through the ring shouts, which often took place during or after a Christian prayer meetings or worship services. Men and women moved in a circle in a counterclockwise direction, shuffling their feet, clapping, and often spontaneously singing or praying aloud.

These ring shouts worked their way into the African American sanctified churches and eventually into secular dances like hambone and juba, eventually evolving into modern dancing such as tapping. From tapping, the modern dance style of stepping, made popular by Black fraternities and sororities on college campuses, evolved and became emblematic for the dance troupe, which was founded 17 years ago by C. Brian Williams, Executive Director and Founder of Step Afrika! Williams began stepping at Howard University as a member of Alpha Phi Alpha fraternity.

“The Phillips Collection has invested substantial resources in educating teachers and students alike, encouraging and bringing about a heightened awareness of the Great Migration of African Americans and its significant place in America’s history,” Williams said in a statement. “Coupled with our own research into the dance and music of the late 1800s along with the countless stories of Southern Migrants, Step Afrika! will produce a performance unlike in other in our history.” He added that The Migration Series is the biggest and most ambitious production the ground-breaking dance troupe has ever undertaken.

Although the Home Performance Series at the Atlas concluded on June 26 Step Afrika! will perform excerpts from the full-length performance on August 18 at the Phillips Collection, home to the Migration Series paintings, as part of the popular after hours series, Phillips after 5. The Phillips Collection has a detailed website dedicated to Jacob Lawrence’s Migration Series at www.phillipscollection.org/migration_series/flash/experience.cfm