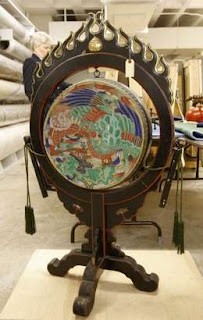 It was a secret known to few Cincinnatians and to virtually no one outside of the Cincinnati Art Museum.

For decades, a spectacular trove of more than 800 antique musical instruments languished – untouched, neglected and forgotten – in storage throughout the museum’s meandering undercroft.

The discovery means that Cincinnati could possess one of the most important collections of non-Western musical instruments in the United States. The collection spans four centuries and represents the cultures of more than 20 countries on four continents. It has drawn the attention of musical instrument specialists and curators in top museums across the nation.

“I was shocked,” said Charles Rudig, a Cincinnati native, antique instrument expert and former head of musical instruments for Sotheby’s Auction House. He has been hired by the museum as a consultant to help evaluate and catalog the instruments.

“They’ve got a fabulous world music collection. It’s wonderful. It’s big. And it’s very similar to the Metropolitan Museum (New York) collection. The Met’s is bigger, but they were both formed at about the same time – the late 19th century.”

About 650 of the instruments were donated to the museum around the turn of the century by a single collector, a wealthy Cincinnati industrialist named William Howard Doane. Many of them are so-called “world music” instruments. Doane traveled the world and snapped up African drums, exotic stringed instruments, keyboards and mallet instruments, flutes and rattles.

With the public’s insatiable interest in world music and global cultures today, the rare find is perfect timing.

“Because they are historic documents, this makes it a very important collection,” said J. Kenneth Moore, curator in charge of the Musical Instruments Department at the Metropolitan Museum of Art in New York. “You don’t find these things in many places. You just find them in a handful of places. It’s something that, I think, should be put on display and should be appreciated by Cincinnatians, and people who visit your city. It should be a point of pride.”

Conservators will be wiping away a century of grime and soot (from when the museum was heated by coal) in preparation for an exhibition of 75 to 100 instruments to coincide with the 2012 World Choir Games in Cincinnati next July.

Curators hope to integrate some pieces throughout the museum’s collection after the exhibition closes. But a dedicated gallery doesn’t fit the museum’s current mission, said museum director Aaron Betsky. So far, the museum – which has put off a planned expansion and laid off employees – has received a small grant to survey the musical instruments. The museum is applying for grants and is seeking other avenues to raise more funds for that project.

Until recently, no one at the museum realized what they had.

“What’s remarkable about it is the breadth,” said Betsky. He said that with the approach of the World Choir Games, it made sense to examine these instruments.

“When I arrived here in 2006, a few of them were out, like the Amati in the case upstairs … I found out that we hadn’t really paid attention to this incredible collection because, like so many other parts of our collection, we don’t really have enough room.

This is really about instruments from around the world. And it was collected for the visual intensity of the pieces, not necessarily for their functionality. It shows the delight that people took in designing and decorating these objects.”

Even if only half of it were refurbished, the collection would be an invaluable resource for scholars and school teachers, said ethnomusicologist Stefan Fiol, an associate professor at the University of Cincinnati’s College-Conservatory of Music.

“Because they’re very old and rare, they are a piece of that historical time, and depending on how they’re displayed, they can really shed light on practices of the period,” said Fiol, who plays the sitar and a range of Himalayan instruments. “In that sense, they’d be invaluable.”

Just a sampling of the find impresses the experts, such as a 19th-century African drum carved from a log, a Burmese crocodile zither, a Chinese version of a hammered dulcimer, a Native American ceremonial raven rattle and a beautifully carved Turkish harp.

The collection also includes a rare 17th-century Amati viola, an 18th-century oboe d’amore by Jakob Denner (one of four known to exist) and a stunning Ruckers virginal (a keyboard instrument), one of just two known in the country.

“It’s important,” said Christina Linsenmeyer, curator of musical instruments at the Musical Instruments Museum in Phoenix. “If they let people know about it and published a catalog, it could become one of the strongest collections in the States.”

Rudig, who lives in New Jersey and Kenwood, and Amy Dehan, Cincinnati Art Museum’s associate curator of decorative arts and design, are meticulously inspecting and cataloging each instrument.

“This has opened up a new area of inquiry for me,” Dehan said. “As it turns out, I’m learning about world musical instruments via one of the best collections in the country, a collection that has been under our nose for 100 years. I can’t tell you how exciting this is. We are making discoveries about this collection every day. “

From initial inspection, some instruments are in surprisingly good condition, while others may not be worthy of conservation efforts. The ravages of time, temperature and humidity may have been contributing factors, and some items possibly arrived in poor condition. There are few records.

“I think most of them did pretty well. But at one time, this building was heated with coal, so some of them have dust and grime on them. It’s not uncommon when you’re dealing with things of age,” Dehan said.

Cincinnati music lovers, including Rudig, recall only sporadic exhibitions of some musical instruments – most recently in the 1980s. Typically, museums can only display a fraction of their holdings. In the past, non-Western musical instruments were often relegated to a corner of an Asian or African wing as a “curiosity,” or put into storage because they were so little understood.

Wealthy travelers or missionaries often collected these musical treasures, said the Met’s Moore, who oversees 5,000 musical instruments, two-thirds of them non-Western. Their provenance and descriptions were sometimes well-documented, sometimes vague and incorrect – such as a “Chinese piano” that Moore recalled seeing in a museum. The field of ethnomusicology – the study of music as culture did not start to grow until the 1960s.

The industrialist Doane began loaning pieces of his eclectic stash in 1887 – a year after the Cincinnati Art Museum opened and two years before the Metropolitan Museum of Art started its musical instrument collection. Doane’s instruments were donated to the Cincinnati museum in parcels, beginning in 1914.

The last published book about the collection, in 1948, lists only 110 instruments (plus “drums”) and has many errors. But the cache was so unusual, it warranted a visit from the first established curator of the Metropolitan’s musical instrument division, Emanuel Winternitz, who wrote the introduction.

Today, with world music and exotic cultures a click away on the Internet, the public’s interest has exploded – and along with it, attendance in musical instrument galleries.

“We have seen an increase of visitors in our galleries, and it’s not only just the treasures of Western art music,” the Met’s Moore said. “I think there is more of an interest in the non-European cultures, in understanding them on various levels, and music is one of them. Certainly, the instruments can tell you a lot about what’s going on.”

Rudig agreed that attitudes have changed.

“You have to have things in a museum display that are fun to look at. You’re entertaining people. So we’ve rediscovered this collection at the right period of time. World music is coming into its own, and people are much more anxious to see those things than they used to be,” he said.