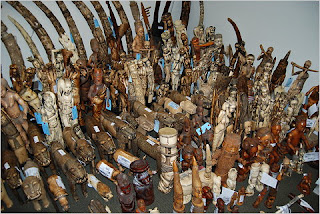 Some of the hundreds of carved ivory tusks a Philadelphia art dealer is charged with smuggling into the country through Kennedy International Airport.

Of the millions of tons of stuff that comes through Kennedy International Airport in travelers’ suitcases each year, some of it is not supposed to be there.

Like the tusks of hundreds of threatened African elephants.

A Philadelphia art and antiquities dealer, Victor Gordon, was arraigned on smuggling charges in federal court in Brooklyn on Tuesday after, the authorities said, they seized about a ton of carved ivory that he had had a confederate bring into Kennedy in his luggage between 2006 and 2009.

The seizure is one of the largest American seizures of elephant ivory on record, the United States attorney’s office said.

Mr. Gordon, 68, had his agent purchase raw ivory and get it carved and then stained or dyed so that it appeared old and therefore not subject to endangered species law, federal prosecutors in Brooklyn said. He then sold the carved tusks through his shop in Philadelphia, Victor Gordon Enterprises, they said.

Mr. Gordon pleaded not guilty before a federal magistrate. He is also charged with violating the Endangered Species Act and faces a maximum sentence of 20 years if convicted.

All told, agents of the federal Fish and Wildlife Service seized 491 carved tusks from Mr. Gordon, 13 of which he had brought to agents in Brooklyn in November 2009, the authorities said.

Trade in the ivory of African elephants is illegal under the 1975 Convention on International Trade in Endangered Species, better known as Cites.

“We all have a responsibility to protect endangered species, both for their sake and for the sake of our own future generations,” Loretta E. Lynch, the United States attorney in Brooklyn, said in a statement.