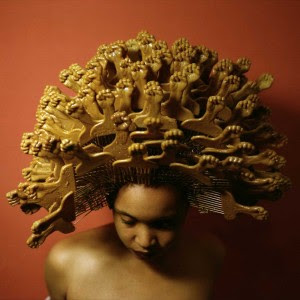 “Posing Beauty in African American Culture,” presented by the USC Fisher Museum of Art, delivers a visual feast of stunning photographs attempting to discuss what it has meant to be “black and beautiful” throughout black history.

The leading themed section, “Constructing a Pose,” offers a snapshot into the lives of blacks through both natural and directed posing.

Dressed in an array of colors, skimpy dresses and dyed hair, the ladies kiss and pose for the camera while the young man stares straight ahead in a white suit, top hat and cane.

This is a group of kids who puts effort into looks for a fun night in which reality can be discarded in favor of dancing, music and magic.

Other noteworthy photos include 1964’s “Bruce Davidson, Body Builder on Venice Beach, CA.” Symbolic of a race often used for entertainment and servitude, a woman takes a photo of a gigantic, black bodybuilder on the beach, who poses for her, becoming the main attraction. The photo serves as a commentary on the societal objectification of the black and African American image.

In an explosion of self-expression, the “Young Man in Plaid, NYC” illustrates the need to release oppressed feelings through clothes, makeup and hair choices. These themes are explored in many other photos — whether with black power uniforms or afros and disco pants, freedom of expression takes a literal meaning through visual presentation.

“Body and Image” similarly explores the varying levels of black culture, as it consists of alluring photographs displaying the tantalizing faces and bodies of different men and women. One particular group from the “Plastic Bodies” exhibit shows a series of four Barbie portraits.

One shows a Barbie with one blue eye and one brown eye, illustrating the black woman’s eternal dilemma: attempting to embrace her beauty in society, even though her DNA denies her of it. The black woman is forever pulling away from herself toward society’s “ideal” of beauty.

“Modeling Beauty and Beauty Contests,” on the other hand, tells the history of a culture through people instead of events. Particularly enticing is a shot of Pam Grier among dozens of other beautiful women from a compilation of student-turned-model photographs, similar to the JET Girl of the Month specials in the present day.

Even more famous faces run rampant throughout the exhibit, including the likes of Denzel Washington and Lena Horne.

The exhibition’s photos are amplified by the small and intimate Fisher Museum. The individual sections are not tremendously powerful on their own, but as a whole the exhibit is very striking. The contrast of white walls let the artwork stand out while black glossy floors reflect the black, faces hanging above.

The exhibit does require some prior knowledge of black history in order to fully grasp the striking statements it makes; however, there is room for the viewer’s own artistic interpretation. There are no explanations or detailed descriptions next to the artwork — the decisions are based on the photos alone.

All in all, the exhibit is enthralling, but one moving and impressive photo stood out above the rest. It features a young girl in a white dress standing in the middle of Harlem, smiling sweetly at the camera, completely innocent and unaware of the hustle and bustle taking place around her.

This sort of innocence can’t erase the painful history blacks have lived through, but it can begin to propel the world forward into an understanding and accepting society, proving that there is hope for coexistence and peace after all.

The exhibit runs Sept. 7 through Dec. 3 with a reception celebrating the opening Oct. 4.