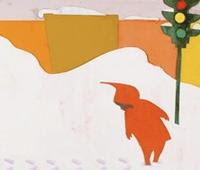 The Jewish Museum will present Ezra Jack Keats: A Creative Response, on Thursday, October 17 at 11:30 am. In this lecture, Caldecott Award-winning illustrator Jerry Pinkney shares his reflections on Ezra Jack Keats‘s work and the role of diversity in children’s literature. This lecture is presented in conjunction with the Museum’s new exhibition, The Snowy Day and the Art of Ezra Jack Keats, on view at the Museum from September 9, 2011 through January 29, 2012.

Pinkney has written, “[Keats’s] role in giving an African-American a central part in the story was a benchmark in mainstream publishing. Using his skill as a painter and his compassion as a humanist, he enthralled, entertained, and educated children as well as adults.” When creating illustrations for the book John Henry, written in collaboration with Julius Lester, Pinkney turned to Keats’s John Henry: An American Legend for inspiration.

Tickets for this program are $15 for the general public; $12 for students and seniors; and $10 for Jewish Museum members. For further information regarding programs at The Jewish Museum, the public may call 212.423.3337, or visit the Museum’s website at www.TheJewishMuseum.org.
A native of Philadelphia, Jerry Pinkney has been illustrating children’s books since 1964, illustrating over one hundred titles, and is the recipient of five Caldecott Honor Medals, a Caldecott Medal, five Coretta Scott King Awards, and four Coretta Scott King Honor Awards.

His books have been translated into sixteen languages and published in fourteen countries. In addition to his work in children’s books, Pinkney has had over thirty, one-man exhibitions, at venues such as the Art Institute of Chicago; the California African American Museum, Los Angeles, CA; the Brandywine River Art Museum, Chadds Ford, PA; Schomburg Center for Research in Black Culture, New York, NY; and The Norman Rockwell Museum in Stockbridge, MA. He has held several professorships and taught at Pratt Institute, Brooklyn, NY; the University of Delaware, Newark, DE; and the University at Buffalo, Buffalo, NY. He lives with his wife in Westchester County.

The Snowy Day and the Art of Ezra Jack Keats is the first major United States exhibition to pay tribute to award-winning author and illustrator Ezra Jack Keats (1916-1983), whose beloved children’s books include Whistle for Willie (1964), Peter’s Chair (1967), and The Snowy Day (1962). Published at the height of the American civil-rights movement and winner of the prestigious Caldecott Medal, The Snowy Day became a milestone, featuring the first African-American protagonist in a full-color picture book. The Snowy Day went on to become an inspiration for generations of readers, and paved the way for multiracial representation in American children’s literature. The dilapidated urban settings of Keats’s stories are also pioneering – picture books had rarely featured such gritty landscapes before. The author and illustrator was born Jacob (Jack) Ezra Katz in Brooklyn. His parents were Eastern European Jewish immigrants and very poor. Primarily self-taught, he drew upon memories of growing up in East New York, one of the most deprived neighborhoods in New York City. Yet his work transcends the personal and reflects the universal concerns of children. Keats used lush color in his paintings and collages and strove for simplicity in his texts. The exhibition features over 80 original works by the artist, from preliminary sketches and dummy books, to final paintings and collages, including examples of Keats’s most introspective but less-known output inspired by Asian art and haiku poetry.Documentary material and photographs will also be on view. Following its New York City showing at The Jewish Museum, The Snowy Day and the Art of Ezra Jack Keats will travel to the Eric Carle Museum of Picture Book Art, Amherst, MA (June 26-October 14, 2012); the Contemporary Jewish Museum, San Francisco, CA (November 15, 2012-February 24, 2013); and the Akron Art Museum (March-June 2013). The Jewish Museum exhibition is part of a wide-scale celebration of the 50th anniversary of the publication of The Snowy Day.

An infrared assistive listening system for the hearing impaired is available for programs in the Museum’s S. H. and Helen R. Scheuer Auditorium.

Public Programs at The Jewish Museum are supported, in part, by public funds from by the New York City Department of Cultural Affairs. Major annual support is provided by public funds from the New York State Council on the Arts, a State Agency. The stage lighting has been funded by the Office of Manhattan Borough President Scott M. Stringer. The audio-visual system has been funded by New York State Assembly Member Jonathan Bing.