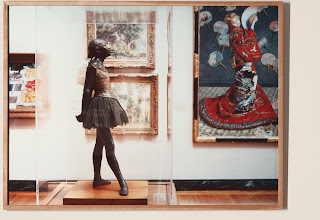 Less than a year after opening its high-profile Art of the Americas Wing, the Museum of Fine Arts in Boston is set to unveil its latest upgrade — the new $12 million Linde Family Wing for Contemporary Art. This weekend a free community day and 24-hour party will celebrate seven new galleries and the 240 art works inside.

But the MFA has long been criticized for neglecting the art and artists of today. With that in mind I visited the new wing as it was in the throws of being installed, where I spoke with museum director Malcolm Rogers.

“I believe you can’t be fully relevant to the life of a contemporary city without having contemporary art,” he told me when I asked why this transformation is necessary. The new galleries are located in the museum’s west wing, originally designed by architect I.M. Pei in 1981. It used to house the entrance where visitors streamed in to purchase their tickets. Gone are the pair of escalators that once rose behind those countertops. They’ve been replaced by a gleaming staircase leading up to the second floor space that, for years, was dedicated to temporary exhibitions of both new and old art.

“People feel they know these galleries well,” Rogers mused, adding, “I think they’re going to be astonished when they come in here and find a completely new world.”

In front of us this “new world” was being delicately unpacked, cleaned, measured, and hung in the spacious, boxy galleries. Keith Crippen, head of design at the MFA, worked with an installation team, raising a heavy object three inches into the perfect place on a wall.

“It’s been very busy,” Crippen admitted. “There was no real break between the American wing and this, but it’s exciting because this presented completely different challenges and conditions that had to be met. This is a space the design department is used to working with over and over because it used to be our special exhibition space. So now to give it this facelift and make it more sympathetic to contemporary art is satisfying.”

There are works by a slew of well-known contemporary artists — Chuck Close, Cindy Sherman, Kiki Smith, Mark Bradford, Sol LeWitt — and a new show of wooden sculptures by Ellsworth Kelly.

There’s also Cambridge artist Wendy Jacob. She was on site at the top of the staircase installing an interactive piece involving sound and touch. Surrounded by transducers, wires and amplifiers, Jacob said she’s thrilled to be part of this moment at the MFA. When she was a kid she took painting classes here with her sisters.

But Jacob’s inclusion in the new wing’s opening addresses a familiar criticism of the MFA — that it doesn’t pay enough attention to contemporary New England artists. Jacob is the 2011 winner of the museum’s annual Maud Morgan Award, which was first granted in 1993 to highlight standout women working in the region. But it hadn’t been given to anyone for three years before Jacob, since 2006. MFA Senior Curator of Contemporary Art Jen Mergel put explained that it was crucial to highlight this year’s winner, and the award’s re-instatement, as part of the inauguration.

“And in terms of Boston artists represented,” she continued, “we have about 10 on view, and out 240 works in this wing. It’s pretty significant to us that we’re able to represent Boston proudly and strongly,” Mergel said.

Mergel has been instrumental in the making of the Linde Wing. The museum hired her in February 2010 to re-imagine the MFA’s role in presenting contemporary art to its audiences.

The Art of the Americas Wing took 10 years to build — and its completion last November freed up staff and space to re-purpose this 80,000 square-foot plot of real estate. But it’s been a race since then to get it completed. She and more than a dozen people will be working right up to the opening this weekend, making sure the galleries tell the story of contemporary art from the MFA’s unique perspective.

“We do have some unexpected choices in the contemporary galleries that give somebody a sense that practices we might call contemporary have maybe been going on for centuries,” Mergel said. “They’re not being installed like an art history book or lesson.

“And so because we have rich collections here at the museum, going back millennia, we can actually draw on our collections and juxtapose things in the contemporary galleries in ways most museums can’t.”

For example, a huge photograph of Cindy Sherman dressed up as Medusa from classical mythology hangs on a wall facing Monet’s iconic painting of his wife dressed in a Japanese Kimono. The pairing illustrates a continuum, Mergel said, and this makes the MFA’s contemporary art story unique.

There is some cross over, though, in the collection on display here and some of the holdings at the Institute of Contemporary Art on the waterfront. Does Jill Medvedow, Director at the ICA, see the MFA’s new addition as competition?

“There’s not great value to any of us, I think, to try to see this as an either/or situation,” she explained, making it clear that she has not seen the MFA’s new wing yet but looks forward to visiting in the coming weeks. “I feel great about having opened the doors for contemporary art in Boston,” Medvedow continued, “and I think that that credit really belongs with the ICA. But we could use all the help we can get in making this part of people’s habit and every day life. This is a great moment, it’s a great renaissance for the arts in Boston. And we want more.”

Rogers at the MFA wants more, too, and evoked the old saying that all boats rise on the same tide. But it’s also a matter of his 19th century institution’s survival, he said — not just so the MFA can stay relevant in a contemporary city, but also so it can grow and thrive in the future.

“A museum like this is so dependent on the people in the city who collect giving us art. We aren’t rich enough to buy ourselves the greatness in this area, so I hope the wing will encourage collecting of contemporary in town, and encourage contemporary collectors support the museum to create the culture of contemporary philanthropy.”

As they prepare for the weekend, Rogers and Mergel both anticipate the inevitable criticisms that will come with new contemporary wing’s opening, but for the moment the contemporary art curator said she feels pretty Zen about it.

“I know what great work has been done,” she said, “I know where we started and how far we’ve come, and I do feel that this is just the beginning. Regardless of what skeptics may say, this is a starting point with room to grow and room to grow strong.”

The new contemporary wing opens to the public on Sunday, but there are events all weekend. A 24-hour party kicks off on Saturday night at 7 pm to honor Christian Marclay’s, “The Clock,” a 24-hour video project recently acquired by the MFA. Of course Rogers will be there, and I had to ask him if the all-night rave was possibly a bid to make the Museum of Fine Art more “hip.”

“Hip?” he repeated with a laugh. “I can’t comment on that. I’m just a museum director in a suit, you know.”