Art, photo collection going up for bids after being seized from Birmingham attorney 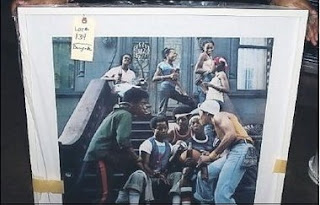 A large collection of photographs and paintings, including many by emerging African-American artists, will be sold at an IRS auction later this month after being seized from a prominent Birmingham attorney to settle a tax debt.

The collection of about 250 paintings and photographs by artists including William Eggleston and Mickalene Thomas has been appraised at more than $500,000 and was seized by the IRS from Russell J. Drake, of the Birmingham firm Whatley Drake & Kallas.

Drake, in an interview Monday, said art is his passion, particularly the work of emerging young African-American artists, and he’s saddened to see the collection go.

“I regret that I’m in this position,” he said. “The recession had a devastating effect on me. It was sort of a perfect storm for a lot of lawyers.”

According to documents on file in Jefferson County Probate Court, the IRS filed two liens against Drake totaling about $497,000. He said that’s “an old number,” and is no longer representative of what he owes the IRS.

Regardless, the collection could raise a substantial amount, said Roberta Colee, the IRS liquidation specialist handling the sale. About 50 different artists and photographers are represented, including Kerry James Marshall, Raymond Pettibon and Mark Flood.

Marshall, a Birmingham native who grew up in South Central Los Angeles, was featured on the PBS program “Art 21” and is known for paintings and sculpture that pay tribute to the civil rights struggle. New York artist Mickalene Thomas is famous for her enamel and sequined paintings of women, which the New York Times called “as impenetrable as they are spectacular.”

One of her works, a painting of a topless prostitute titled “She works hard for the money,” was pulled from the sale after it was judged too provocative by the IRS. At least two other of her works remain in the auction.

To casual observers, though, the photographer Hank Willis Thomas may be the most recognizable. The collection includes at least two photos by Thomas, who is perhaps best known for his “Priceless #1,” a satirical take on the “priceless” Mastercard commercials that makes a powerful statement about inner-city violence.

Thomas, a graduate of California College of Fine Arts’ masters program and artist in residence at Johns Hopkins University, once lectured at the Birmingham Museum of Art.

The art may be sold individually or in the aggregate, with a minimum bid of $20,000, the IRS said in a prepared statement.