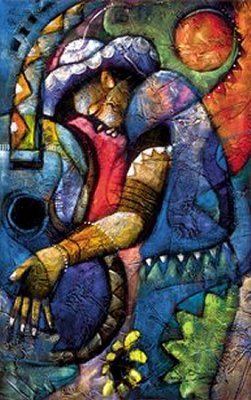 Buchi Upjohn Aghaji dips his brush into vastly different hues when creating his works. He expresses his art through a variety of media including oil, watercolor and acrylic on cold-pressed paper, canvas, burlap, wood and pottery. The result is a refreshing change from the contemporary trend in Afro-centric painting. Aghaji says that while he was always interested in painting, his studies in the university steered him into the advertising field where he worked for a year in Nigeria. It wasn’t until he moved to England that he realized that he could pursue his painting full time. The response he received from his work was so encouraging that he and an illustrator friend opened a studio.

Aghaji decided to move to the United States and spent three years in New York. He now resides in Metro Atlanta. Aghaji utilizes the graphic techniques he acquired while majoring in visual communications at the University of Nigeria. He also uses the traditional “uli” motifs found in his tribe, the Igbos of Nigeria. Uli is the art of body decorations, consisting of lines and patterns that convey such admirable qualities as the strength, fertility, humility, and compassion of the individuals they adorn. This combining of the best of the “old” and the new come together make his work a unique and exhilarating experience. Upjohn’s work has received much recognition and acclaim in Nigeria and other parts of the world. His work has been collected by the President of Nigeria and numerous private collectors in England, Germany, America and Africa.