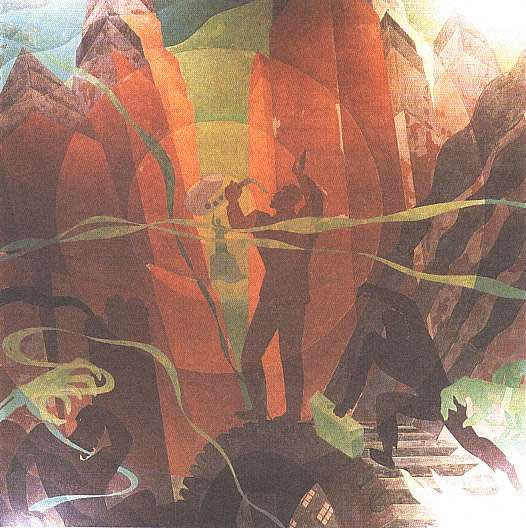 Aspects of a Negro Life: Song of the Towers, 1934 by Aaron Douglas

Aaron Douglas, who was born on May 26, 1899 in Topeka, Kansas, is the American artist perhaps most closely associated with the Harlem Renaissance, and for synthesizing formal and symbolic elements of African art with a modern European aesthetic. He studied at the University of Nebraska, from which he graduated, as well as Columbia University Teachers College. His artistic career began as an illustrator, working in ink drawings.
..

Originally called the New Negro Movement, the Harlem Renaissance was a literary and intellectual flowering that fostered a new black cultural identity in the 1920s and 1930s. Critic and teacher Alain Lockedescribed it as a “spiritual coming of age” in which the black community was able to seize upon its “first chances for group expression and self determination.”With racism still rampant and economic opportunities scarce, creative expression was one of the few avenues available to African Americans in the early twentieth century. Chiefly literary—the birth of jazz is generally considered a separate movement—the Harlem Renaissance, according to Locke, transformed “social disillusionment to race pride.”
Read more: The Birth of the Harlem Renaissance: History & Timeline — Infoplease.com http://www.infoplease.com/spot/bhmharlem1.html#ixzz1pnqlUztP