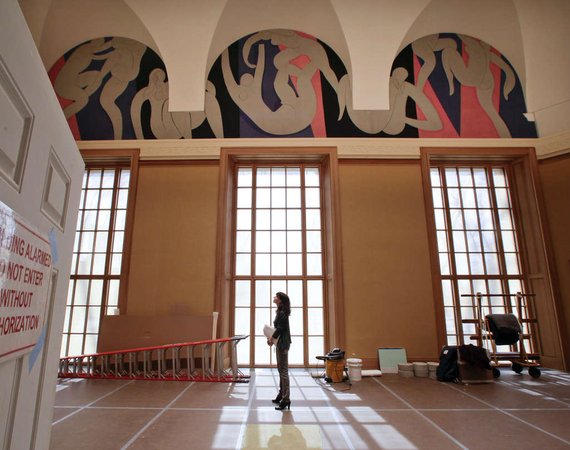 It was not exactly a twist-and-shout moment when The Dance came off the wall at the Barnes Foundation in Merion.

Nearly two decades ago, amid incessant legal skirmishing, Matisse’s 34-foot-wide triptych mural on canvas was maneuvered from the wall it had been made to fill, and traveled to Washington, Paris, and the Philadelphia Museum of Art for exhibition.

It was a tense, court-approved voyage, but The Dance waltzed through it, finally returning to its newly renovated Merion home in 1995.

Last year, amid even more legal skirmishing over plans to move the entire Barnes collection, The Dance again came down from its perch, this time permanently, and it has been reinstalled in its new home at the soon-to-open Barnes gallery on the Benjamin Franklin Parkway. Foundation officials decline to discuss the moving or reinstallation of the collection, citing security concerns.

Timed tickets to see The Dance and the rest of the Barnes Foundation’s renowned collection of early modernist works go on sale Thursday to the general public.

The $150 million gallery officially opens May 19, and tickets have been moving briskly to Barnes members since Feb. 1. In fact, memberships, too, have been selling well, foundation officials say: In March 2009, membership totaled 390; today, there are about 15,000 members. Package prices begin at $90. Without membership, adult tickets are $18.

Because of the modest size of the foundation’s gallery spaces – the Philadelphia gallery interiors mimic those in Merion – timed tickets are necessary. Gallery hours will be 9:30 a.m. to 6 p.m. Wednesdays through Mondays, with Friday hours extended to 10. A maximum of 150 visitors will be admitted per hour.

During the last phase of its life in Merion, the Barnes was open six days a week, with a visitor limit of 450 per day (up from the previous limit of 400). Annual attendance never came close to 100,000, the foundation reported.

Visitation will be driven, for a time, she said, by curiosity; numbers will likely dip in 2014.

The operating budget for 2013, the first full year at the new site, is projected at about $14 million, Zminda said. About 56 percent of that will come from earned income – admissions and other sales.