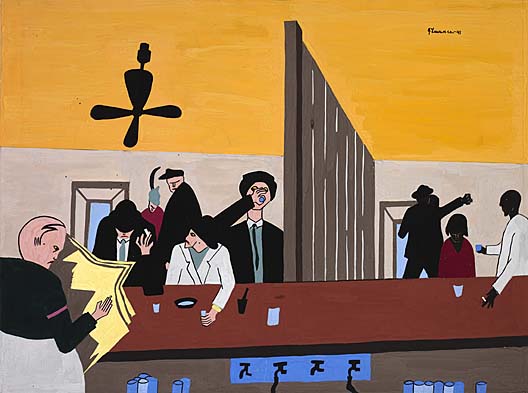 African American Art: Harlem Renaissance, Civil Rights Era, and Beyond presents a selection of paintings, sculpture, prints, and photographs by forty-three black artists who explored the African American experience from the Harlem Renaissance through the Civil Rights era and the decades beyond, which saw tremendous social and political changes. In response, these artists created an image of America that recognizes individuals and community and acknowledges the role of art in celebrating the multivalent nature of American society.

The artworks in the exhibition lay out a vision of America from an African American viewpoint. These artists embrace many universal themes and also evoke specific aspects of the African American experience—the African Diaspora, jazz, and the persistent power of religion.

The artists work in styles as varied as documentary realism, abstraction, and postmodern assemblage of found objects to address a diverse array of subjects. Robert McNeill, Richmond Barthé, and Benny Andrews speak to the dignity and resilience of people who work the land. Jacob Lawrence, Roy DeCarava, and Thornton Dial, Sr. acknowledge the struggle for economic and civil rights. Sargent Johnson, Loïs Mailou Jones, and Melvin Edwards address the heritage of Africa, and images by Romare Bearden recast Christian themes in terms of black experience. James Porter and Alma Thomas explore beauty in the natural world.

All 100 artworks in the exhibition are drawn entirely from the Smithsonian American Art Museum’s rich collection of African American art. More than half of the featured works, including paintings by Benny Andrews, Jacob Lawrence, and Loïs Mailou Jones, and photographs by Roy DeCarava, Gordon Parks, Roland Freeman, and Marilyn Nance, are being exhibited and circulated by the museum for the first time, and ten works are recent acquisitions. The exhibition includes fifty-four photographs, which will be integrated into the display while also organizing the exhibition thematically. Individual object labels will connect the artists and their works with the artistic, social, and contextual factors that shaped their creation. The exhibition is organized by Virginia Mecklenburg, senior curator.

Publication
The exhibition is accompanied by a beautifully illustrated catalogue, written by distinguished scholar Richard J. Powell, the John Spencer Bassett Professor of Art and Art History at Duke University. The book also includes entries about each artist by Virginia Mecklenburg; Theresa Slowik, the museum’s chief of publications; and Maricia Battle, curator in the prints and drawings division at the Library of Congress. The catalogue, co-published by the museum with Skira Rizzoli in New York, will be available for purchase ($60 hardcover, $40 softcover) in the museum store and at bookstores nationwide.

National Tour
African American Art: Harlem Renaissance, Civil Rights Era, and Beyond is available for tour after closing at the Smithsonian American Art Museum. If you are interested in hosting the exhibition at your museum, please visit our traveling exhibitions page for contact information.