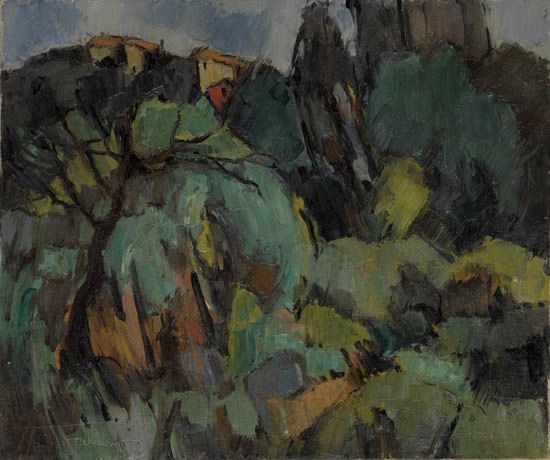 Landscape Near Grasse is a striking Impressionist painting by Hale Woodruff; it recalls landscapes painted by Cézanne nearby in Provence. Grasse is also the location of paintings by American artists as diverse as John Singer Sargent and Loïs Mailou Jones.

Woodruff left Paris for Cagnes-sur-Mer on the coast of Provence in the summer of 1930, following in the footsteps of his countrymen Palmer Hayden and William H. Johnson, and such notables as Modigliani, Renoir and Soutine. Attracted to its artistic history, sunlight and cheap accommodations, Woodruff soon rented a studio at 34 rue Carnot, which he later learned was once Chaim Soutine’s atelier. Though Woodruff denied Soutine’s influence, one could argue that his later landscapes reflect an interest in both Cézanne and Soutine. Another Woodruff oil, Provençal Landscape, 1930, describes a very similar hilly scene with scattered red-roofed houses–he sent it to the Harmon Foundation in New York, where it was exhibited in 1931. Leininger-Miller pp. 130-32.
Estimate $20,000-30,000

Swann’s semi-annual auctions of African-American Fine Art boast museum-quality works by important American artists, and this October sale is no exception. Highlights include:

William Edouard Scott’s When the Tide is Out, oil on canvas, 1932, shown top left.

Three paintings by Hughie Lee-Smith, including Boy with Flute, oil on canvas, circa 1960.

Several Al Loving paintings, including his Untitled (Cube), acrylic on canvas, circa 1969.