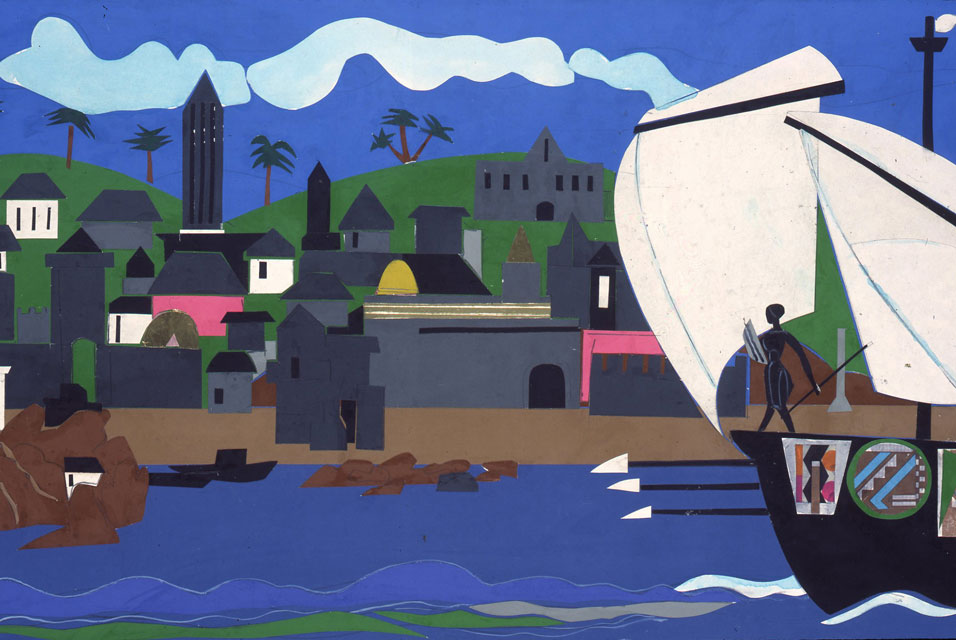 Romare Bearden, Home to Ithaca, 1977, Collage, Courtesy Mount Holyoke College Art Museum, South Hadley, Massachusetts. Gift of the estate of Eileen Paradis Barber (Class of 1929).
WINSTON-SALEM, NC.- The first full-scale presentation outside of New York of Romare Bearden’s “Odysseus Series” debuted at Reynolda House Museum of American Art on October 13, 2012.
“Romare Bearden: A Black Odyssey” will be on view through Jan. 13, 2013. In 1977, Romare Bearden (1911–1988), one of the most powerful and original artists of the 20th century, created a cycle of collages and watercolors based on Homer’s epic poem, “The Odyssey.” Rich in symbolism and allegorical content, Bearden’s “Odysseus Series” created an artistic bridge between classical mythology and african american culture. The works conveyed a sense of timelessness and the universality of the human condition, but their brilliance was displayed for only two months in New York City before being scattered to private collections and public art museums.
A new exhibition organized by the Smithsonian Institution Traveling Exhibition Services (SITES) features 55 Bearden works, including collages from the “Odysseus Series,” and watercolors and line drawings relating to his interest in classical themes. “Romare Bearden: A Black Odyssey” will debut at Reynolda House Museum of American Art before continuing on a seven-city national tour through 2014.
The exhibition is curated by renowned English and Jazz scholar Robert G. O’Meally, the Zora Neale Hurston Professor of English and Comparative Literature and founder and former director of the Center for Jazz Studies at Columbia University.
“In creating a black Odyssey series, Bearden not only staked a claim to the tales of ancient Greece as having modern relevance, he also made the claim of global cultural collage—that as humans, we are all collages of our own unique experiences,” said O’Meally. “Indeed, Bearden does not merely illustrate Homer?he is Homer’s true collaborator, and he invites us as viewers to inherit Homer’s tale and interpret it as our own.”
Born in Charlotte, Bearden moved with his family to Harlem as a young child, part of the Great Migration of african americans from the inhospitable South to greater opportunity in the North. Throughout his career, Bearden created images of the lives of travelers on their way to and from home, a theme no more powerfully explored than in his “Odyssey Series.” Bearden had examined classical themes before, but the “Odysseus Series” expanded his exploration of literary narratives and artistic genres by presenting his own personal reinterpretation of the subject.