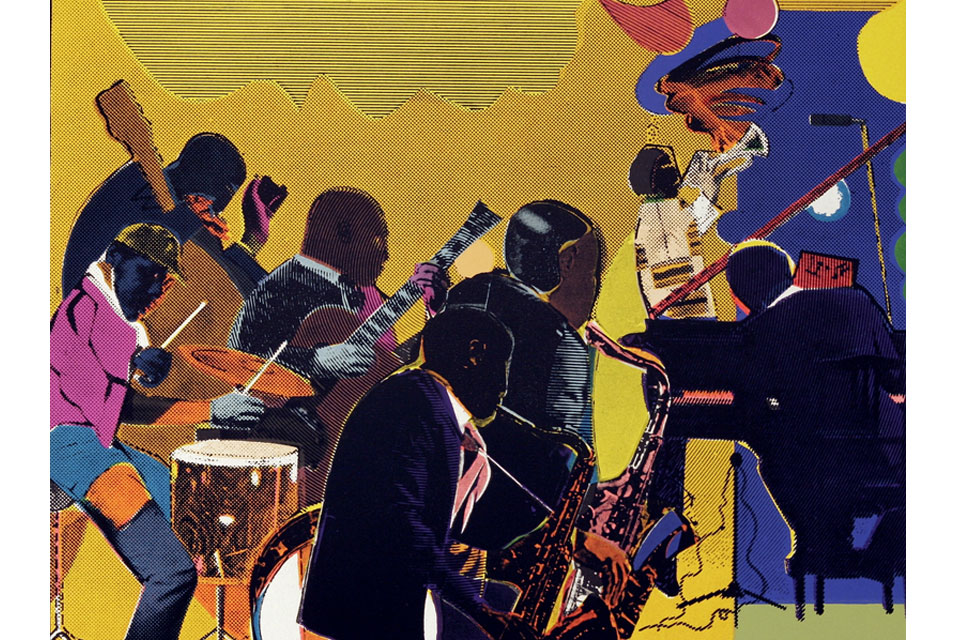 Romare Bearden, American, 1911-1988, Out Chorus, 1979-80, etching and aquatint, 12 3/8 x 16 1/4 in. (image), Edition 200.© Romare Bearden Foundation/Licensed by VAGA, New York, NY.
GLENS FALLS, NY.- The Hyde Collection joins institutions across the country as part of a centennial tribute honoring artist Romare Bearden (1911-1988). The Museum’s exhibition, From Process to Print: Graphic Works by Romare Bearden, is on view in the Wood Gallery from October 6, 2012 through January 6, 2013. Presenting over seventy-five lithographs, etchings, collagraphs, collagraph plates, screen prints, drypoints, monoprints, and engravings, these works were created over a span of thirty years. Together they demonstrate how Bearden, considered one of America’s most important and inventive artists, experimented, innovated, and collaborated on his journey toward mastery of the print medium.
This important exhibition offers an unparalleled opportunity to examine Bearden’s printmaking process revealed through his investigation of a particular image, theme, or technique. He possessed an extraordinary facility for weaving a rich tapestry of literary, biblical, mythological, popular culture, and western and non-western themes in his prints that were also informed by his African-American cultural experiences.
On Sunday, October 21, 2012 at 2pm, Dr. Jo-Ann Graham will speak in the Museum’s Froehlich Auditorium about Bearden and other artists of the twentieth-century in a lecture entitled Abstract Expressionism and the african american Artist. Dr. Graham is former head of humanities at The City University of New York and associate of the Cinque Art Gallery in New York City, co-founded by Romare Bearden. This program is free and open to the public and is made possible through the support of the New York Council for the Humanities’ Speakers in the Humanities program.
The Hyde is among a group of institutions throughout the United States honoring Bearden’s legacy. Hundreds of exhibitions, performances, and programs are being organized to celebrate the centennial. Among them are Amon Carter Museum of American Art, Fort Worth, Texas; Currier Museum of Art, Manchester, New Hampshire; Jazz at Lincoln Center, New York City, New York; Neuberger Museum of Art, Purchase, New York; Newark Museum, Newark, New Jersey; Price Tower Arts Center, Oklahoma City, Oklahoma; and Reynolda House Museum of American Art, Winston-Salem, North Carolina.
From Process to Print: Graphic Works by Romare Bearden was organized by the Romare Bearden Foundation, New York, New York.More Information: http://artdaily.com/index.asp?int_sec=2&int_new=58382&b=african%20american#.UITNwlFQjRY[/url]
Copyright © artdaily.org