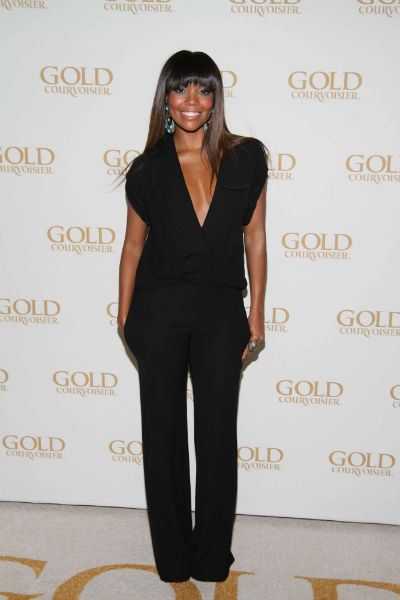 Gabrielle Union stepped onto the white carpet at her 40th birthday party on Monday sponsored by Courvoisier Gold with glowing skin, a fresh smile and the friendly demeanor we have come to expect from the actress after many years in the industry.

Totally unlike her famously crabby character in Deliver Us From Eva, Union was full of self-deprecating humor about reaching the big 4-0. “It’s either going to be armageddon, or serendipity,” she told reporters gathered for the fete. “I’m not sure which. My a** falls, my boobs start to droop. I don’t know. I’ve been looking at my friends who’ve made it, and look practically intact, and younger than ever. I’m hoping… It’ll be my luck that it all goes south and my a** drops to my ankles,” Union stated with a sparkling wit that charmed typically jaded journalists.

From the looks of the gorgeous actress that night, the possibility that age will bring Union anything but more opportunities seems unlikely. Wearing a 5th & Mercer jumpsuit from the new clothing line by her gal pal La La Anthony, the Think Like a Man star noted that she had accessorized with her “favorite earrings.” Yet, what really drew attention were the new bangs.

“I ran out of weaves, so I said, ‘Let me try a bang.’ Literally, I just ran out of weaves,” Union explained about switching up her look. Borrowing the idea from fellow movie star Taraji P. Henson, Gabrielle admitted, “I just bit her whole style. I can’t promise what it will look like next week. I may have found a new muse and I will have stolen their look.”

In addition to the fresh cut, Gabrielle credited her pretty locks to a specific product. “It’s a 10 is everything. It’s a leave in conditioner. Now they have a whole line of shampoos, but I got hooked on the leave-in. It’s everything for every hair type.” She praised the detangler for its protection even against intense heat. And the secret to that glowing skin?

“I drink a gallon a day. I’m still using my regular Neutrogena, but I haven’t moved into the anti-aging products. I basically use my pink grapefruit scrubs and cleansers, but I drink a crapload of water.” Union’s skin, hair, and nails all benefit from extreme hydration as her main beauty secret, she told People magazine‘s correspondent.

While lovely on the outside, Union is far from focused on the superficial. As she easily responded to numerous press outlets with intelligent aplomb, Union also demonstrated her substance. For instance, she is reading The Warmth of Other Suns by Isabel Wilkerson, “a piece of history that we don’t shed enough of a light on, to explain how we’ve ended up all over the country, as opposed to just nestled in the south,” Union related about this black history masterpiece.

As her professional life continues to build, Union’s personal life is blossoming. She beamed when discussing her boyfriend Dwayne Wade — but has no plans to rush into motherhood anytime soon. As she turns 40 on Monday, Gabrielle looks forward to “more time with friends” and “more time with my family,” in addition to cherishing greater simplicity. “I don’t have the time for drama and chaos in my life. I have just eliminated crazy people, crazy situations, unnecessary situations that can be avoided. I just don’t have that urge anymore to be in the madness.”

TheGrio spoke to Gabrielle Union in further depth about how to maintain a youthful spirit at any age, her feelings about the election and campaigning for Obama — and her take on the controversial casting of Zoe Saldana as Nina Simone.

Gabrielle Union: I don’t know, because I feel twelve! Physically, other than my lower back pain, I physically don’t feel any different. Emotionally and mentally, I’m in a good place. I’m entirely happy. I have a great life. I’m actually at a place to appreciate it, and recognize it.

How do you stay fashionable and fabulous at any age?

Oh gosh, with a team of people who help me! (Laughs.) I look at trends, but I’m not a slave to them. I like to spend some money, but I’m not going to go broke. I just try to be reasonable with it and I ask for advice. I stay with my head buried in a magazine. I travel, I try to be inspired by people. And I hang out with a lot of young people, you know? I just don’t date them. (Laughs.) I look at them for fashion advice.

You recently held a campaign event for President Obama.

RELATED: Where are the sisters’ issues in the 2012 presidential race?

What is the message that you want to convey to voters?

I should just say, “Vote, make your voice heard.” But I have to be more specific, as there is so much on the line with this election, especially with young people. If you’re happy that Osama Bin Laden is dead, and the auto industry is alive — if you’ve ever needed a Pell grant, or have ever heard of one, or would like to know that they are going to continue to exist, you have to vote for Barack Obama.

now in so many places. Show up. Understand that this election is about you. You will be affected. Your vote does count.

What’s your opinion on the Zoe Saldana casting as Nina Simone?

Wow, this was a while ago. I remember the big brouhaha. I’ve been a fan of Nina Simone, and I kind of look to her daughter for her opinion.

But I’ve also known Zoe for a long time. Zoe as an actress — she’s amazing. I understand that it’s important image-wise to physically capture what Nina Simone looked like really, because that so informs her story. Like when they cast Renee Zellweger as a slave in Cold Mountain – that was a stretch. It impacts the story, and it changes the story into something else. I can understand people being upset.

But we can have that conversation civilly and without destroying Zoe, who is a dope, fantastic Morena, who represents in such a huge way for darker-skinned Latinas, but I do understand the need for Nina Simone to be Nina Simone and not re-imagined.

What’s next for you?

We start Being Mary Jane in January on BET, and then we shoot the sequel for Think Like a Man.