In 1902 the Walters Art Museum acquired a Pontormo painting of an Italian noblewoman, Maria Salviati, dated ca. 1539. Back then it was considered a portrait of a woman whose hands were “in funny places,” as Gary Vikan, the museum’s director, puts it. Then in 1937, restorers removed some over-painting—and discovered a child was there. That child was assumed to be a portrait of Maria’s son, Cosimo de’ Medici.

And Then He Was a She

Now curators say the boy was a girl–Giulia de’ Medici. The daughter of Duke Alessandro de’ Medici, who was believed to be the son of a black female servant, Giulia is thought to have been the most prominent European woman of African descent at that time.

This discovery helped inspire “Revealing the African Presence in Renaissance Europe,” an inventive show at the Walters that enlists familiar faces of art history to spotlight lesser-known ones in social history. Focusing on the period between 1480 to 1610, an era of increased contact as trade routes expanded, diplomats traveled more widely, and Africans were imported to Europe en masse to serve as slaves, the show includes works by Dürer, Rubens, Pontormo, and Veronese, among many others, depicting Africans living in or visiting Europe. The museum describes the show as an effort to restore an identity to individuals who have been invisible–in various senses of the word.

The show uses representations of slaves in Europe to find out who they were, how they lived, and what their depictions say about Renaissance society. A Caracci portrait of a slave woman is a fragment of a double portrait of her owner, of whom a bit of veil remains. She is holding a clock, meant to announce her mistress’s Christian concern for the quick passage of time. 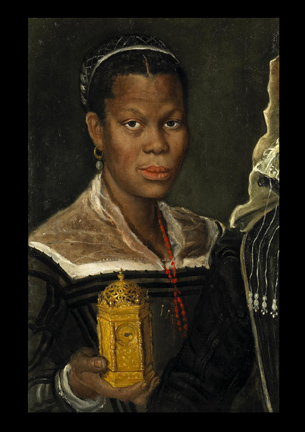 Land of the Freed

A significant difference between African slaves in Renaissance Europe and pre- and post-revolutionary North America is that in Europe, slaves were more likely to be freed. According to wills, testimonies, and other documents from the 16th century, owners of black Africans in Western European countries not only liberated their slaves, but also often helped them establish livelihoods as lawyers, churchmen, schoolteachers, boatmen, authors, artists, and more. Renaissance Lisbon was home to the highest percentage of blacks in Europe at the time, ranging in status from slaves to knights.

This reality is reflected in an unusual painting made by an unknown artist, probably from the Netherlands, of the Lisbon waterfront in the late 16th century, where blacks and whites from a variety of social strata co-exist in a public square. 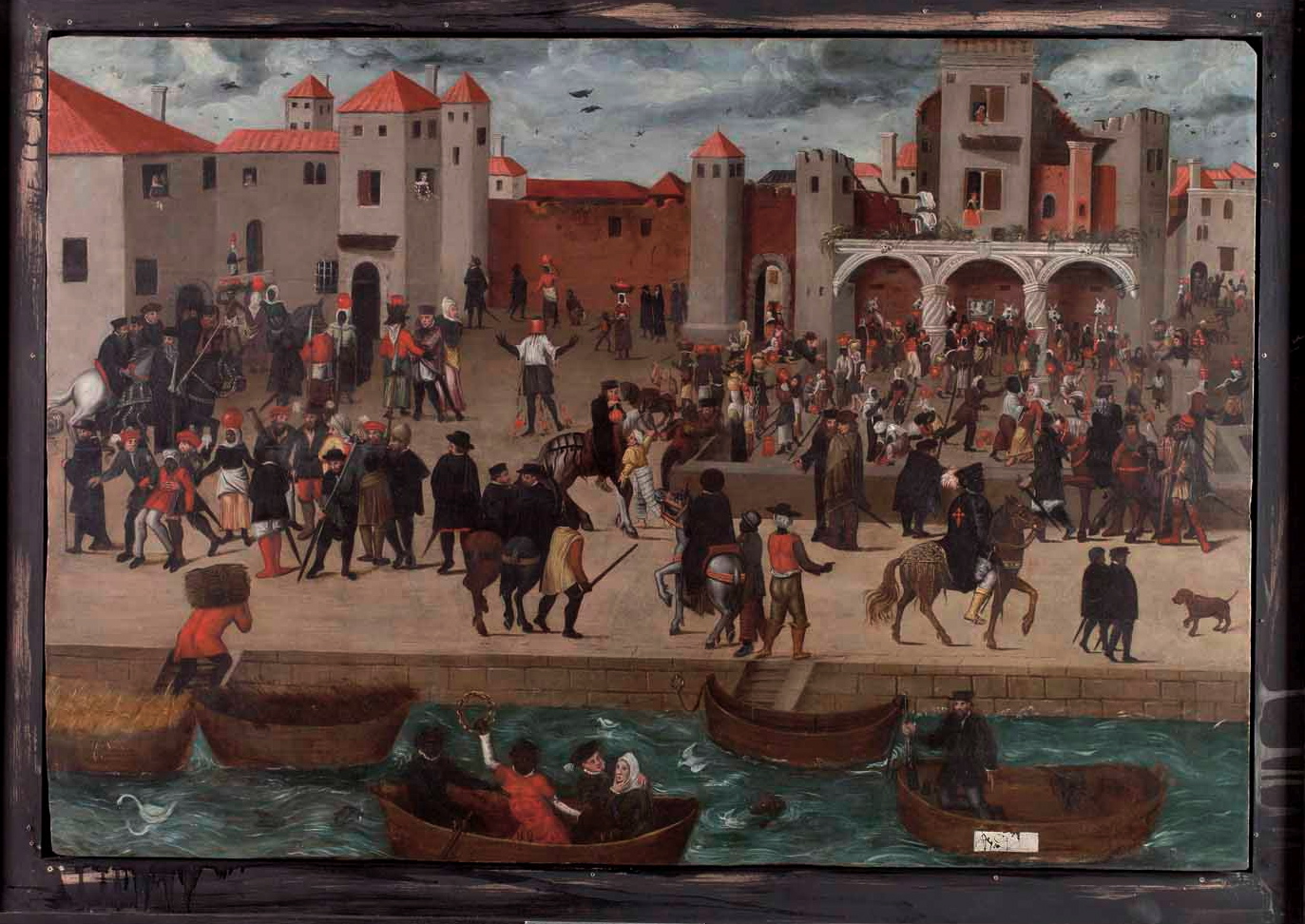 Netherlandish, Chafariz d’el Rey in the Alfama District (View of a Square with the Kings Fountain in Lisbon), ca. 1570-80, oil on panel.

The show also includes a sculpture of the first Christian saint of African origin to be canonized in modern times, Saint Benedict of Palermo (1524–89), who was born in Sicily (then part of Spain) to parents who were probably from Ethiopia and formerly enslaved. 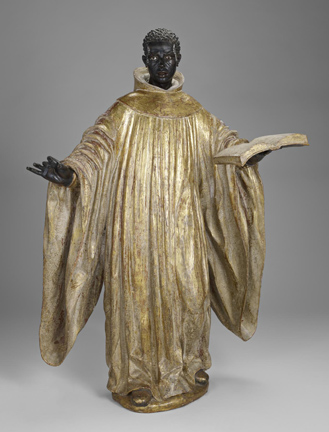 No Nudes Were Good Nudes

To Europeans, as curator Joaneath Spicer writes in the catalogue, Africa was “extraordinary in its excess,” representing savagery, sexuality, the unexplored, and the unknown. The black male nude does not often appear in European art of the time–unless it is depicted among the damned, as in the Last Judgment. It was considered too threatening.

From a more decorous remove, the black body fascinated artists. Some, like Dürer, explored its phrenological aspects, focusing on the shape of the skull. Others used it to demonstrate their flair for carving certain kinds of stone, like onyx, or their skill rendering dark skin tones alongside white fabrics. Diplomats from the Congo, Ethiopia, Tunisia, and Morocco, along with other prominent Africans, sometimes served as inspiration for European artists–although, as Kate Lowe notes in the catalogue, such portraits inevitably reveal more about European fantasies than they do about the subjects’ personalities.

Peter Paul Rubens, Head of an African Man Wearing a Turban, ca. 1609, oil on paper, laid down on panel.

The artist who painted the Three Mulattos of Esmeraldas, Andrés Sánchez Galque, was an indigenous Indian from present-day Ecuador who trained with Catholic missionaries. So why is he in a show about Renaissance Europe? Because his subjects, Don Francisco de Arobe and his two sons, had African as well as Indian ancestry. The men, who governed an independent Afro-Indian community, had traveled to Quito in 1599 to convert to Christianity and sign a treaty with colonial rulers. To commemorate the occasion a local judge commissioned this portrait for Spain’s King Philip III.

Sánchez Galque depicted the bi-racial men in multicultural get-ups that signal their peculiar status in Colonial Latin American society: Sporting elaborate golden earrings and nose rings, holding spears in the one hand and sombreros in the other, they wear Andean-style ponchos of fine Asian silk, adorned with European ruffs and capes. 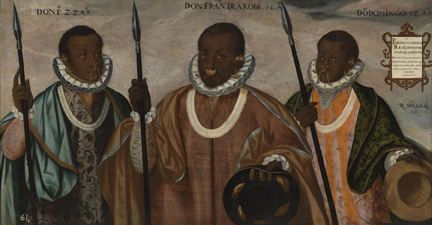 Who Sells My Purse….

As part of the programming for the show, the Walters has invited artist Fred Wilson to lecture about “Speak of Me as I Am,” his project for the American Pavilion of the 2003 Venice Biennale, which was created around the same theme: the “hidden-in-plain-sight” history of Africans in Europe. In Wilson’s case, that focus continued up to the present, in the form of African immigrants he hired to sell knockoff accessories outside the pavilion. The show also included what has become a recurring motif in his work, chandeliers in black Murano glass that play with concepts of darkness and light. 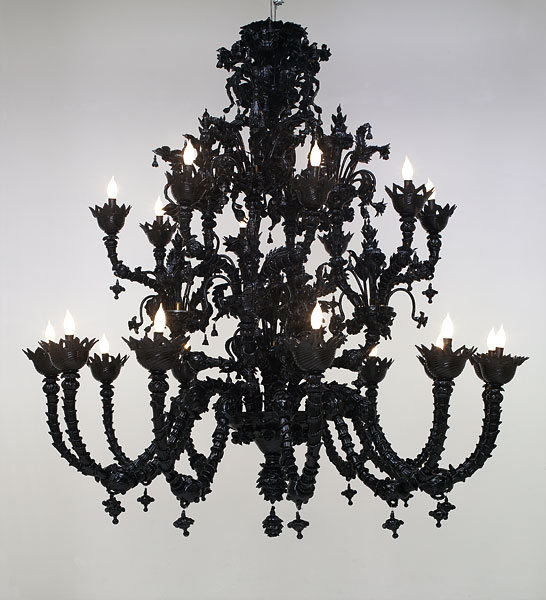 “Revealing the African Presence in Renaissance Europe” is the latest innovative effort to build on the work of a long-running research project with a trans-Atlantic, multi-millenarian purview: “The Image of the Black in Western Art,” launched by Dominique de Menil in the 1960s and currently managed by Harvard University Press and the W.E.B. Du Bois Institute for African and African American Research. Edited by David Bindman and Henry Louis Gates, Jr., the series, which began with the age of the pharaohs, published its most recent volume, which started with the American Revolution and ended with World War I, last May. Forthcoming in spring 2014 is Volume 5: Part 1, focusing on the era from the Artistic Discovery of Africa to the Jazz Age. Part 2, which covers the Harlem Renaissance to the Age of Obama, follows that fall. 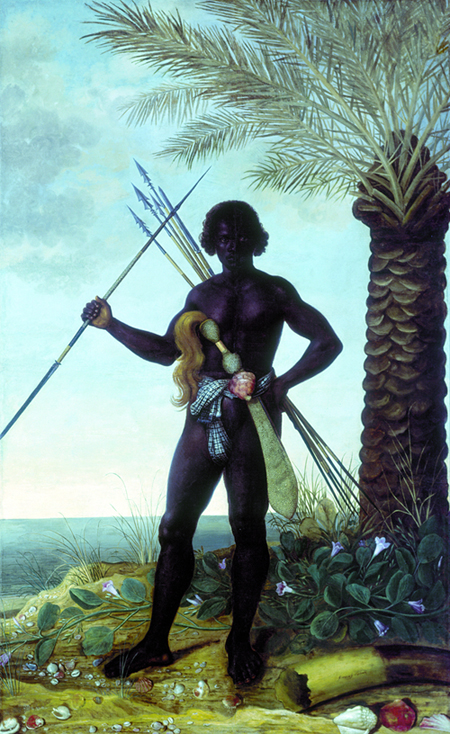 Albert Eckhout. African American man, dated 1641, oil on canvas. From “The Image of the Black in Western Art.”

Increasingly, scholars and curators have been exploring Africa’s role in the hybrid cultures that developed on both sides of the Atlantic. These initiatives range from “The African Presence in Mexico: From Yanga to the Present,” a long-travelling show organized by the National Museum of Mexican Art, to Robert Farris Thompson’s recent book “Aesthetic of the Cool: Afro-Atlantic Art and Music.” “Afro Modern: Journeys Through the Black Atlantic,” recently at Tate Liverpool, tracked the influence of Africa on modernism, beginning in the early 20th century with the Harlem Renaissance continuing through contemporary art. 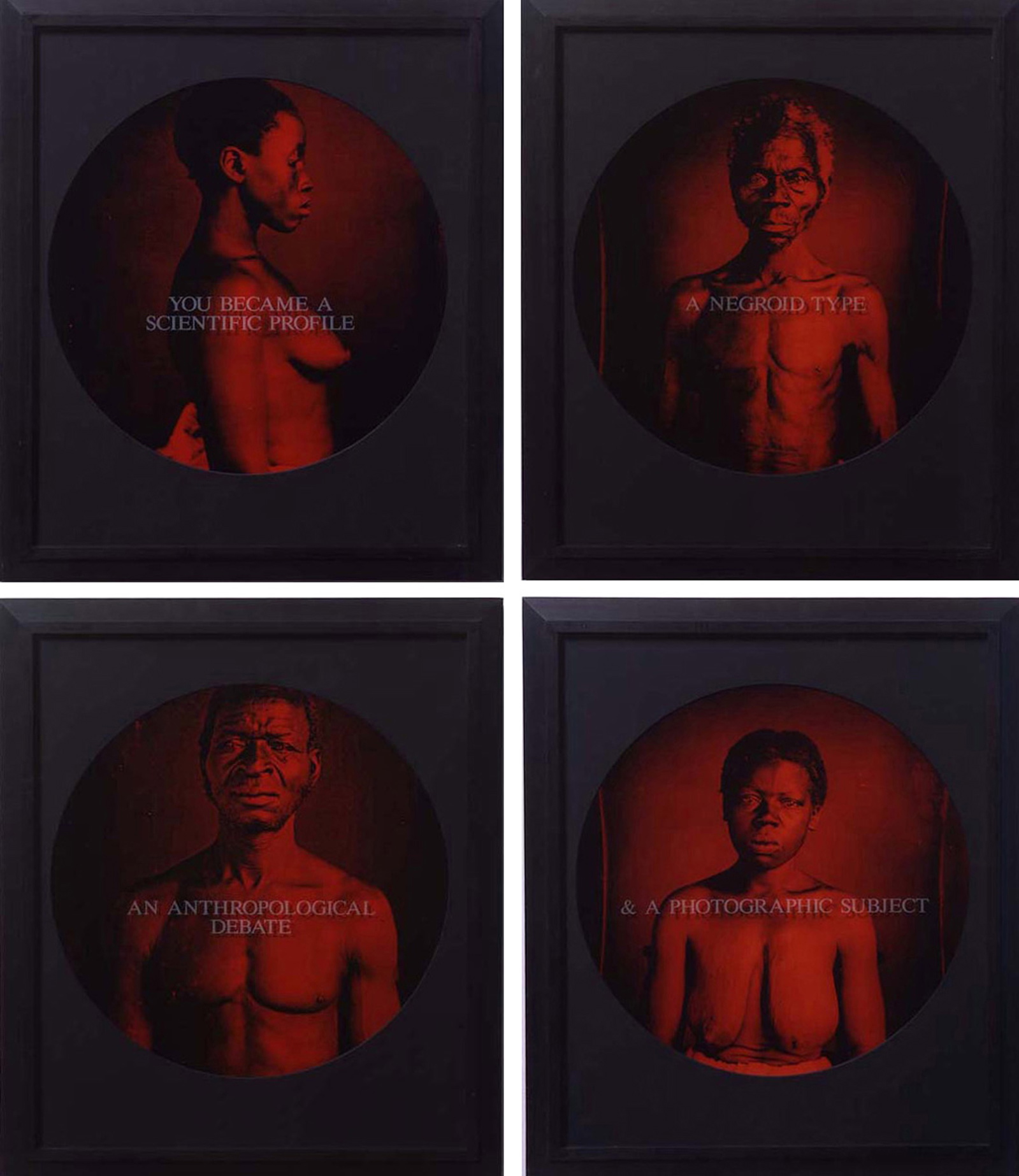 As Roger Atwood reported here, on November 27 the Metropolitan Museum of Art will open “African Art, New York, and the Avant-Garde,” which juxtaposes African and Western art to look at the impact of African art on Matisse, Picasso, Brancusi, among other Modernists, as well as members of the Harlem Renaissance like Malvin Gray Johnson and James L. Allen.

From Kongo to Tango

And next year comes “Kongo across the Waters,” a collaboration between the Samuel P. Harn Museum of Art at the University of Florida and the Royal Museum for Central Africa in Tervuren, Belgium. The focus is the art, religion, and culture of the Kongo region of Central Africa–and how they were adapted and transformed when they arrived with the slave trade in the United States and Central America. Along with a multitude of objects from Africa, the show includes vodou vessels from Haiti, face vessels from South Carolina, coiled baskets by Gullah artists of the American South, and examples of the music and dance that developed as Kongo beats were transmitted through Congo Square in New Orleans, emerging in jazz, Stepping, the Charleston, and the Tango.

The final section considers the legacy of Kongo esthetics on contemporary art worldwide, by figures including Steve Bandoma and Paulo Kapela from Central Africa, Haiti’s Edouard Duval Carrié, José Bedia from Cuba, and Renée Stout and Radcliffe Bailey from the U.S. 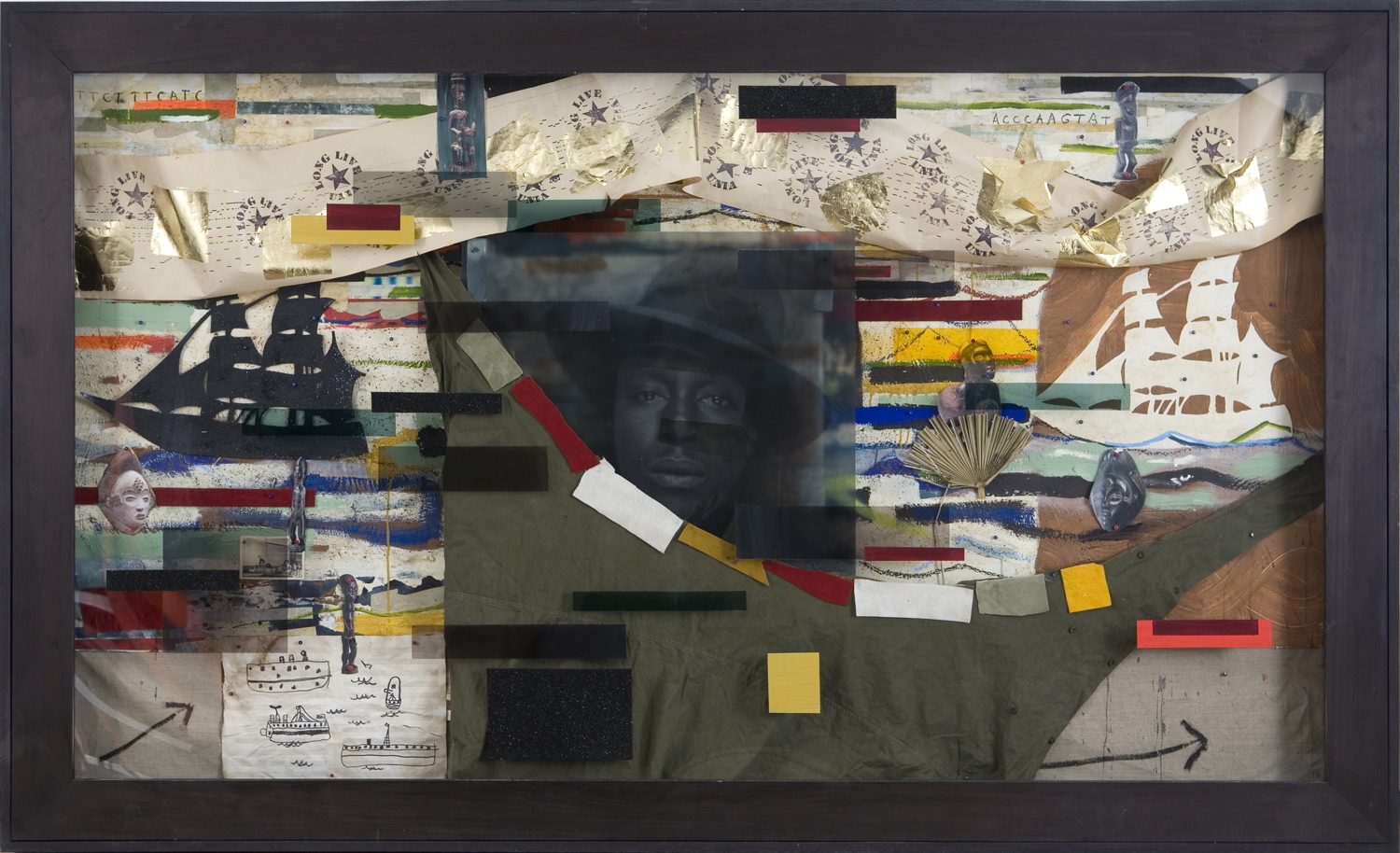 Radcliffe Bailey, Returnal, 2008, mixed media. In “Kongo Across the Waters,” coming to the Harn.

Be There or Be Square

Back in Maryland, school groups were invited to react to the exhibition at the Walters in artworks of their own. Inspired by that unknown artist’s view of multicultural Lisbon, children from Harlem Park Elementary/Middle School envisioned a Renaissance plaza–a little Lisbon, a little Baltimore, a little Rome. The picture is on view in a display of student work concurrent with “Revealing the African Presence.” It’s another place the African presence continues to manifest and reveal itself–if you know where to look.

Both shows will travel to the Princeton University Art Museum: “Revealing the “African Presence” will run from February, 16, 2013 through June 9, 2013; “Kongo Across the Waters” will open in November 2014.