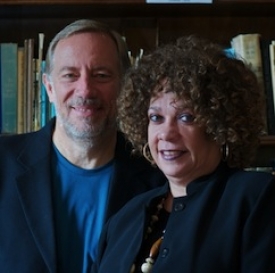 Gather at the Table

Sharon Morgan and Thomas DeWolf, the authors of “Gather at the Table” will speak candidly about racism and the unhealed wounds of slavery.

Excerpts From The Book:

“I don’t spend a lot of time around white people. They scare me,” confesses Sharon Leslie Morgan, a black woman from Chicago’s Southside. Despite her trepidation, Morgan, a descendent of slaves on both sides of her family, agrees to embark on a journey toward racial reconciliation with Thomas Norman DeWolf, a white man from rural Oregon and a descendent of the largest slave-trading dynasty in early America.

In Gather at the Table, DeWolf and Morgan speak candidly about racism and the unhealed wounds of slavery. “The legacy of slavery,” they write, “is a combination of historical, cultural, and structural trauma that continues to touch everyone in American society today.” Schools, neighborhoods and churches are as segregated as ever, they note. Health disparities between black and white people remain significant and African Americans are overrepresented in prisons and underrepresented in colleges. Racism is more subtle now that in the past, but it still exists, the authors argue. “To be blunt,” DeWolf writes, “it is clear to me that systems remain in place in the United States that benefit white people and inhibit everybody else.”

Thomas Norman DeWolf, author of Inheriting the Trade, is featured in the Emmy-nominated documentary film Traces of the Trade, which premiered at the Sundance Film Festival and on the acclaimed PBS series POV. DeWolf speaks regularly about healing from the legacy of slavery and racism at conferences and colleges throughout the United States.

Sharon Morgan is a marketing communications consultant and a nationally recognized pioneer in multicultural marketing. An avid genealogist, she is the webmaster for OurBlackAncestry.com and is a founder of the Black Public Relations Society.