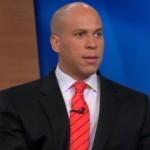 Newark Mayor Cory Booker said Hurricane Sandy pushed back his decision on whether to run for governor of New Jersey in 2013.https://octobergallery.com/wp-content/uploads/2012/11/CORY-BOOKER-HURRICANE-SANDY-large570.jpg

“The reality is Sandy has pushed my timeline back,” Booker said on his monthly radio program, according to the New Jersey Star-Ledger.

Booker and current New Jersey Governor Chris Christie have both been helping with recovery since Hurricane Sandy ravaged the Garden State in late October.

“The devastation on the Jersey Shore is some of the worst we’ve ever seen,” Christie said after the storm. “The cost of the storm is incalculable at this point.”

Christie has surveyed the damage from Sandy and has focused heavily on recovery efforts, especially along the devastated Jersey Shore. Booker has been busy helping Newark residents affected by the storm, getting hundreds of free Hot Pockets for hungry residents and even letting neighbors into his home to charge electronic devices.

Booker could make a decision on a gubernatorial run by the end of this year. The New Jersey Star-Ledger reports:

Two sources familiar with Booker’s thinking told The Star-Ledger last week that he plans to decide whether to challenge Christie — who has indicated he plans to seek re-election — by mid-December, leaving plenty of time for other potential Democratic candidates to mount a campaign.

Booker said he has had numerous phone calls with state leaders over the past few days.