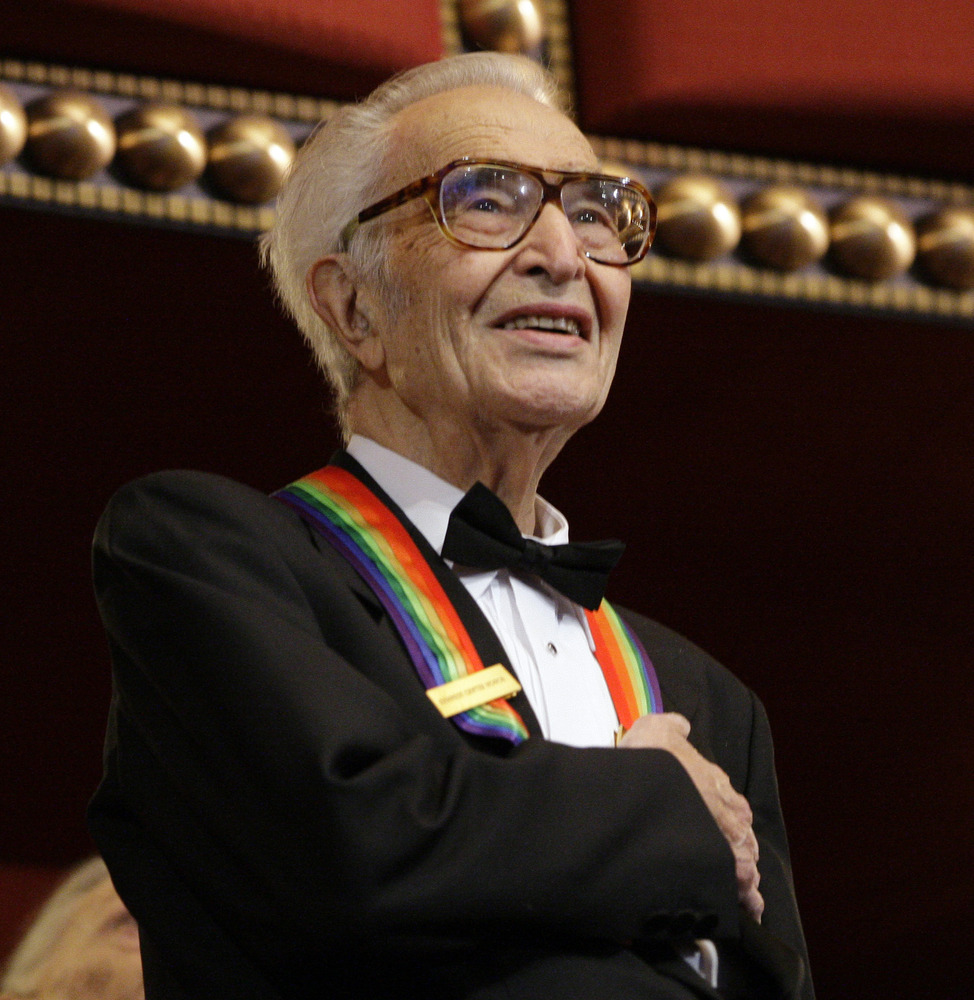 HARTFORD, Conn. (AP) — Jazz composer and pianist Dave Brubeck, whose pioneering style in pieces such as “Take Five” caught listeners’ ears with exotic, challenging rhythms, has died. He was 91.

Brubeck died Wednesday morning at Norwalk Hospital of heart failure after being stricken while on his way to a cardiology appointment with his son Darius, said his manager Russell Gloyd. Brubeck would have turned 92 on Thursday.

Brubeck had a career that spanned almost all American jazz since World War II. He formed The Dave Brubeck Quartet in 1951 and was the first modern jazz musician to be pictured on the cover of Time magazine – on Nov. 8, 1954 – and he helped define the swinging, smoky rhythms of 1950s and `60s club jazz.

The seminal album “Time Out,” released by the quartet in 1959, was the first ever million-selling jazz LP, and is still among the best-selling jazz albums of all time. It opens with “Blue Rondo a la Turk” in 9/8 time – nine beats to the measure instead of the customary two, three or four beats.

A piano-and-saxophone whirlwind based loosely on a Mozart piece, “Blue Rondo” eventually intercuts between Brubeck’s piano and a more traditional 4/4 jazz rhythm.

The album also features “Take Five” – in 5/4 time – which became the Quartet’s signature theme and even made the Billboard singles chart in 1961. It was composed by Brubeck’s longtime saxophonist, Paul Desmond.

“When you start out with goals – mine were to play polytonally and polyrhythmically – you never exhaust that,” Brubeck told The Associated Press in 1995. “I started doing that in the 1940s. It’s still a challenge to discover what can be done with just those two elements.”

After service in World War II and study at Mills College in Oakland, Calif., Brubeck formed an octet including Desmond on alto sax and Dave van Kreidt on tenor, Cal Tjader on drums and Bill Smith on clarinet. The group played Brubeck originals and standards by other composers, including some early experimentation in unusual time signatures. Their groundbreaking album “Dave Brubeck Octet” was recorded in 1946.

The group evolved into the Quartet, which played colleges and universities. The Quartet’s first album, “Jazz at Oberlin,” was recorded live at Oberlin College in Ohio in 1953.

Ten years later, Joe Morello on drums and Eugene Wright on bass joined with Brubeck and Desmond to produce “Time Out.”

In later years Brubeck composed music for operas, ballet, even a contemporary Mass.

In 1988, he played for Mikhail Gorbachev, at a dinner in Moscow that then-President Ronald Reagan hosted for the Soviet leader.

“I can’t understand Russian, but I can understand body language,” said Brubeck, after seeing the general secretary tapping his foot.

In the late 1980s, Brubeck contributed music for one episode of an eight-part series of television specials, “This Is America, Charlie Brown.”

His music was for an episode involving NASA and the space station. He worked with three of his sons – Chris on bass trombone and electric bass, Dan on drums and Matthew on cello – and included excerpts from his Mass “To Hope! A Celebration,” his oratorio “A Light in the Wilderness,” and a piece he had composed but never recorded, “Quiet As the Moon.”

“That’s the beauty of music,” he told the AP in 1992. “You can take a theme from a Bach sacred chorale and improvise. It doesn’t make any difference where the theme comes from; the treatment of it can be jazz.”

In 2006, the University of Notre Dame gave Brubeck its Laetare Medal, awarded each year to a Roman Catholic “whose genius has ennobled the arts and sciences, illustrated the ideals of the church and enriched the heritage of humanity.”

At the age of 88, in 2009, Brubeck was still touring, in spite of a viral infection that threatened his heart and made him miss an April show at his alma mater, the University of the Pacific.

By June, though, he was playing in Chicago, where the Tribune critic wrote that “Brubeck was coaxing from the piano a high lyricism more typically encountered in the music of Chopin.”

In 1996, he won a lifetime achievement award from the Grammys and in 2009 he was a Kennedy Center Honors recipient.

Brubeck told the AP the Kennedy Center award would have delighted his late mother, Elizabeth Ivey Brubeck, a classical pianist who was initially disappointed by her youngest son’s interest in jazz. (He added that she had lived long enough to come to appreciate his music.)

Numerous jazz musicians were already on their way to Connecticut this week for a birthday concert in his Brubeck’s honor that had been scheduled for Thursday in Waterbury. The show will go on as a tribute concert. Darius, an acclaimed pianist, was among those scheduled to perform along with saxophonist Richie Cannata, and Bernie Williams, former New York Yankees star and a jazz guitarist.

Born in Concord, Calif., on Dec. 6, 1920, Brubeck actually had planned to become a rancher like his father. He attended the College of the Pacific (now the University of the Pacific) in 1938, intending to major in veterinary medicine and return to the family’s 45,000-acre spread.

But within a year Brubeck was drawn to music. He graduated in 1942 and was drafted by the Army, where he served – mostly as a musician – under Gen. George S. Patton in Europe. At the time, his Wolfpack Band was the only racially integrated unit in the military.

In an interview for Ken Burns’ PBS miniseries “Jazz,” Brubeck talked about playing for troops with his integrated band, only to return to the U.S. to see his black bandmates refused service in a restaurant in Texas.

Brubeck and his wife, Iola, had five sons and a daughter. Four of his sons – Chris on trombone and electric bass, Dan on drums, Darius on keyboards and Matthew on cello – played with the London Symphony Orchestra in a birthday tribute to Brubeck in December 2000.

“We never had a rift,” Chris Brubeck once said of living and playing with his father. “I think music has always been a good communication tool, so we didn’t have a rift. We’ve always had music in common.”