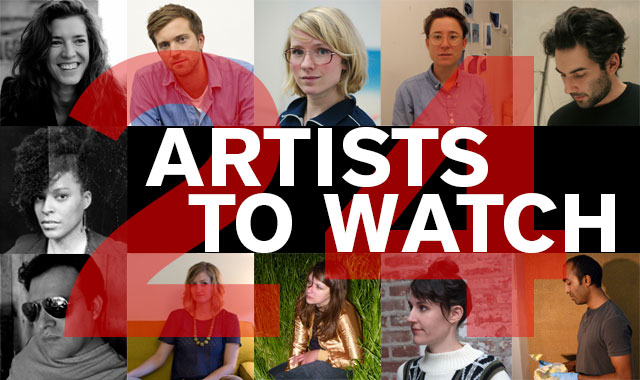 As in past years, Modern Painters presents a list of emerging artists whose work we — and the artist-nominators we’ve collaborated with — find especially promising. In previous lists, we have showcased as few as nine artists and as many as 100. This time we’ve opted for two dozen, which allows us to describe and reproduce work by each while remaining broad and international in our reach. We remain convinced that other artists are the best spotters of talent, and so again this year we’ve relied on the expert aid of a group of seasoned artists: Rita Ackermann, Dike Blair, Sarah Cain, Anne Collier, N. Dash, Thomas Demand, Natalie Frank, Coco Fusco, Samara Golden, Susan Hefuna, Adam Helms, Glenn Kaino, Ali Kazma, Sam Moyer, Lisa Oppenheim, Erik Parker, Tal R, Kirstine Roepstorff, Tino Sehgal, Katrin Sigurdardottir, Fiona Tan, Nari Ward, Jonas Wood, Erwin Wurm. Erik Wysocan.

A sculptor, Hirte thinks in a complex way about presentation and the ideas behind exhibitions, both for his art — which draws on the history and audience of the spaces in which he shows his work — and in his curatorial practice. Even though the artworks themselves seem like formalist sculptures and found objects, he sees them as a collage bringing together diverse elements from sculpture and the world of objects.

Lisa Oppenheim — who exhibited a work in a recent show Hirte curated at Drei Gallery, in Cologne — says, “What is remarkable about Hirte’s work is the way in which collage functions as a structuring logic rather than simply a way of describing formal aspects of individual pieces. A central theme in his practice seems to be the way in which ideas are in themselves collages, sourced from different media and historical and physical spaces.” And indeed, the uniting methodology in Hirte’s work draws on ideas that belong to linguistics: wordplay, syntax, and semantics. “But with an undertone of parody,” the artist adds.

“All of my work is human-scale, scaled to real life, and appropriative of the banal and everyday,” says Lee of her photographs and sculptures, which often fixate on subjects as unremarkable as the potato. “They’re handmade readymades — which, I know, is a contradiction.” Her show last year at Jack Hanley Gallery, in New York, included a watermelon fabricated from plaster and a faux zebra skin made with painted linen. The artist, who runs the New York gallery 47 Canal and is the founder of 179 Canal Gallery, currently has work in “New Pictures of Common Objects,” curated by Christopher Lew and on view at MoMA PS1 through December 31. “While Margaret’s work is rooted in handmade sculpture, it speaks to concerns of life in the 21st century,” explains Lew, “especially how the intangible online world is never that far from the physical.”

“My work speaks about how power in high places is used to corner a large segment of society,” says Aragon, whose videos deal with conflict in his home country. “I am currently making a video whose origin lies in the social protest against mining on the continent. The result of my investigation is an action executed by a male choir that sings in front of a mine that was abandoned during the colonial period in Oaxaca. The musical composition is made from the street protest slogans, with stylistic hints of Baroque. Another project consists in metaphorically re-creating a ‘death flight,’ which was something that the government used to disappear tortured bodies of peasants.” The tossing of people from planes into the ocean was a tactic, he tells us, that originated in the South Pacific during the 1970s. “This despicable practice was subsequently adopted by the South American dictatorships to eliminate their rivals,” Aragon says. “And for another recent project, I made a video about the tiny borders that are generated in a small town in southern Mexico, where the residents have violent disputes over how their territory is marked. 13 musicians play separate funeral marches while standing on stone mounds, whose function is to draw the territorial lines.”

Lately, Kurian has pursued projects “concerned with reaching beyond the human,” as he puts it. One, to be exhibited this fall in India, consists of clarified butter, or ghee, silkscreened directly onto linen. The butter is then dusted with gold, as for fingerprints. The silkscreened images are either taken from the patterns inside security envelopes or are fabrications incorporating quasi-crystalline formations. Both, Kurian says, “are meant to withhold information from others. I found that I was more interested in the mechanism that hid the information than in the information itself. Thus the image becomes a screen, revealing and hiding simultaneously. This work addresses the sense of hiding or withdrawal as a general motif, almost as an aesthetic law: Nothing presents itself as such. Phenomenally, the silkscreened pattern can just barely be seen, and only in a particular light. In the right or wrong position, it disappears into a cloud of golden dust and the scent of musty butter. The series is titled ‘Prevenient,’ meaning anticipatory; it’s a word borrowed from a phrase, ‘prevenient grace,’ coined by the 18th-century theologian John Wesley.”

“I record the numerous ways we can look at photography and think about photographic images,” Mater says of her work. Her process is exceptional in that she investigates photography by turning it on itself, disrupting our sense of what this medium is. In her hands, photography loses any relationship to the documentary and instead approaches something closer to painting and drawing, which she takes as the basis of her practice. She interpolates drawing with photograph y— for example, using a camera to record the process of drawing, which is then masked by multiple negatives, generating countless different outcomes from one supposedly unique drawing. Mater is currently producing a book to be published early next year by Roma.