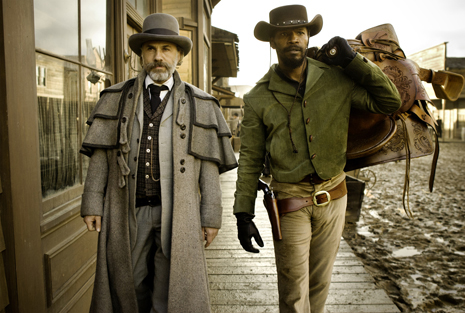 In early 2010, not long after the release of Quentin Tarantino’s Second World War revenge epic, “Inglourious Basterds,” I began teaching a course on American history at Moscow State University. When a Russian friend asked me what I thought of the film I told him I loved the way the director created an alternate history in order to make a larger point about the universal nature of heroism. My friend and, as I later learned, lots of other Russians took issue with the film for precisely that reason. “Is this,” he asked, “how Americans really perceive World War II?” In Russia, where the annual May 9th celebrations of the German surrender dwarf those of the Fourth of July in this country, the sacrifices that were crucial to defeating Hitler are a point of huge national pride. The history department at the university features a marble monument to hundreds of university students who died defending the country. Because many Russians feel that the world—and particularly the United States—has never properly recognized the scale of their losses, they tend to see “Inglourious Basterds” not as a revenge fantasy but as an attempt to further whitewash their role in Hitler’s demise. The alternate history in “Inglourious Basterds” failed there because the actual history had yet to be reconciled. The movie’s lines between fantasy and the actual myopic perspectives on history were so hazy that the audience wasn’t asked to suspend disbelief, they were asked to suspend conscience. With “Django Unchained,” Tarantino’s tale of vengeful ex-slave, what happened in Russia is happening here.

The theme of revenge permeates Tarantino’s work. If the violence in his films seems gratuitous, it’s also deployed as a kind of spiritual redemption. And if this dynamic is applicable anywhere in American history, it’s on a slave plantation. Frederick Douglass, in his slave narrative, traced his freedom not to the moment when he escaped to the north but the moment in which he first struck an overseer who attempted to whip him. Quentin Tarantino is the only filmmaker who could pack theatres with multiracial audiences eager to see a black hero murder a dizzying array of white slaveholders and overseers. (And, in all fairness, it’s not likely that a black director would’ve gotten a budget to even attempt such a thing.)

The most recent Hollywood attempt to grapple with slavery was Steven Spielberg’s “Lincoln,” a biopic that presents the final four months of the President’s life and his attempts to shepherd the Thirteenth Amendment through Congress. Lincoln as he appears in the film is a man fully formed and possessed of a vast wellspring of indignation about slavery. But he also appears as the moral vector of his age in ways that don’t square with history. In focussing so directly on Lincoln’s efforts, Spielberg’s film slights abolitionists, radical Republicans, and, crucially, the African-Americans—slave and free—who pushed Lincoln to the positions he eventually adopted.

From its opening scene, “Django” inverts this scenario. Here is the spaghetti Western about an ex-slave turned bounty hunter who takes the bloody business of emancipation into his own hands. This is not Tarantino’s best film but it is probably his most clever. He plays fast and loose with history here, but there are risks implicit in doing this with a film about slavery that aren’t nearly as significant in toying with the history of the West. The history of the West is settled in ways that are not the case for the history of the American South and slavery. The film’s premise alone was enough to spark controversy. Spike Lee—a longtime critic of Tarantino—took the unwieldy position that he refused to see the film but knew that it would be disrespectful to his ancestors.

There are moments where this convex history works brilliantly, like when Tarantino depicts the K.K.K. a decade prior to its actual formation in order to thoroughly ridicule its members’ (literally) veiled racism. But, as my Russian friend pointed out about “Inglourious Basterds,” “Django Unchained” makes it apparent that not even an entertaining alternate history can erase our actual conceptions of the past.

In “Django,” the director creates an audacious black hero who shoots white slavers with impunity and lives to tell about it. In the Harlem theatre where I saw the film, the largely black audience cheered each time an overseer met his end. There is a noble undertaking at the heart of all this gunplay. Django, played brilliantly by Jamie Foxx, and King Schultz, his white bounty-hunter mentor—played by an equally adroit Christoph Waltz—are on a mission to rescue Hildy (Kerry Washington), the enslaved woman Django loves. The trade-off for an audience indulging in that emotionally powerful and rarely depicted brand of black heroism is overlooking aspects of the film that were at least as troubling as the other parts were affirming.

Primary among these concerns is the frequency of with which Tarantino deploys the n-word. If ever there were an instance in which the term was historically fitting it would seem that a Western set against the backdrop of slavery—a Southern—would be it. Yet the term appears with such numb frequency that “Django” manages to raise the epithet to the level of a pronoun. (I wonder whether the word “nigger” is spoken in the film more frequently than the word “he” or “she.”) Had the word appeared any more often it would have required billing as a co-star. At some point, it becomes difficult not to wonder how much of this is about the film and how much is about the filmmaker. Given the prominence of the word in “Pulp Fiction” and “Jackie Brown”—neither of which remotely touch on slavery—its usage in “Django” starts to seem like racial ventriloquism, a kind of camouflage that allows Tarantino to use the word without recrimination.

This is just the first path in the labyrinth of racial concerns that “Django” constructs. Here, as in “Lincoln,” black people—with the exception of the protagonist and his love interest—are ciphers passively awaiting freedom. Django’s behavior is so unrepentantly badass as to make him an enigma to both whites and blacks who encounter him. For his part, Django never deigns to offer a civil word to any other slave, save his love interest. In a climactic scene, Django informs his happily enslaved nemesis that he is the one n-word in ten thousand audacious enough to kill anyone standing in the way of freedom.

Is this how Americans actually perceive slavery? More often than not, the answer to that question is answered in the affirmative. It is precisely because of the extant mythology of black subservience that these scenes pack such a cathartic payload. The film’s defenders are quick to point out that “Django” is not about history. But that’s almost like arguing that fiction is not reality—it isn’t, but the entire appeal of the former is its capacity to shed light on how we understand the latter. In my sixteen years of teaching African-American history, one sadly common theme has been the number of black students who shy away from courses dealing with slavery out of shame that slaves never fought back.

It seems almost pedantic to point out that slavery was nothing like this. The slaveholding class existed in a state of constant paranoia about slave rebellions, escapes, and a litany of more subtle attempts to undermine the institution. Nearly two hundred thousand black men, most of them former slaves, enlisted in the Union Army in order to accomplish en masse precisely what Django attempts to do alone: risk death in order to free those whom they loved. Tarantino’s attempt to craft a hero who stands apart from the other men—black and white—of his time is not a riff on history, it’s a riff on the mythology we’ve mistaken for history. Were the film aware of that distinction, “Django” would be far less troubling—but it would also be far less resonant. The alternate history is found not in the story of vengeful ex-slave but in the idea that he could be the only one.

Django’s true nemesis is not the slaveholder who subjects Hildy to cruel punishments but Stephen, the house slave devoutly allied with the slaveholder. The central conflict is not between an ex-slave and a slaver but between two archetypes—the militant and the sellout. But in creating Stephen, Tarantino necessarily trafficked in the stereotypes he was ostensibly responding to. Samuel L. Jackson plays Stephen’s overblown insouciance and anachronistic mf-bombs to great comedic effect. There are moments, however, when ironies cancel each other out, and we’re left with a stark truth—at its most basic, this is an instance in which a white director holds an obsequious black slave up for ridicule. The use of this character as a comic foil seems essentially disrespectful to the history of slavery. Oppression, almost by definition, is a set of circumstances that bring out the worst in most people. A response to slavery—even a cowardly, dishonorable one like what we witness with Stephen—highlights the depravity of the institution. We’ve come a long way racially, but not so far that laughing at that character shouldn’t be deeply disturbing.

On the hundred-and-fiftieth anniversary of the Emancipation Proclamation, it’s worth recalling that slavery was made unsustainable largely through the efforts of those who were enslaved. The record is replete with enslaved blacks—even so-called house slaves—who poisoned slaveholders, destroyed crops, “accidentally” burned down buildings, and ran away in such large numbers their lost labor crippled the Confederate economy. The primary sin of “Django Unchained” is not the desire to create an alternative history. It’s in the idea that an enslaved black man willing to kill in order to protect those he loves could constitute one.