Jon Stewart Calls Out Gun Control Opponents: ‘It Is Absolutely The Time To Talk’ (VIDEO) 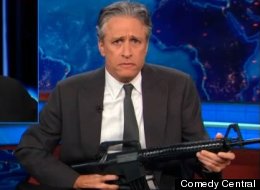 Jon Stewart devoted his entire show to the subject of gun control on Tuesday, including discussing the subject with retired General Stanley McChrystal. But it was his two-part opener that was less satire and more impassioned plea for reasonable discussion and ideas that cut right to the heart of the matter.

In a particularly eye-opening correlation, Stewart showed how multiple points of legislation and enforcement reduced the number of drunk-driving incidents in this country, insisting that the same might be done for gun violence.

“How about we make assault rifles available but only in shooting ranges, make guns less sexy so they won’t be considered so cool by young people, the next Jason Bourne movie stars Woody Allen, how about that?”

He also took on the notion that violent video games and movies are the sole source of the problem, brandishing a fake assault rifle after watching a series of news clips designed to gin up hysteria and outrage.

After featuring multiple shots of gun control opponents saying “it’s not the time to talk”, “gun control doesn’t work”, and scapegoating anything but our obsession with firearms, Stewart made an impassioned plea for a united, non-partisan commitment to ending massacres like the ones in Newtown and Aurora. He also made it clear that refusing to even consider gun control options is currently our biggest obstacle.

Watch part one above and part two below, then let us know what you think should be done to solve the epidemic of violence in America. Remember, as Jon said there are (almost) no bad ideas.